Rabat - A delegation representing the parliament of the Economic Community of West African States (ECOWAS) has met with senior Moroccan officials during its visit to the country. 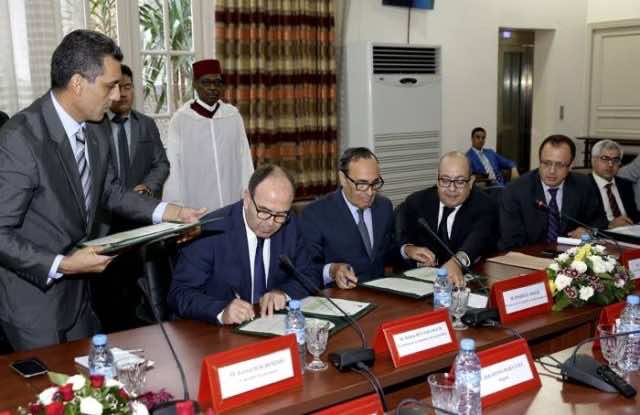 Rabat – A delegation representing the parliament of the Economic Community of West African States (ECOWAS) has met with senior Moroccan officials during its visit to the country.

The framework convention will help set up a joint commission in order to organize events dealing with issues of interest for both sides, the state press agency Maghreb Arab Press reported.

The two sides stated that the joint commission will be set up soon, consisting of 11 members representing the vice presidents of ECOWAS parliament and the two Moroccan houses as well as four MPs from each side.

El Malki described the signature of the convention framework as “historical.” The president of the House of Representatives said that this signature will pave the way for further cooperation between the Moroccan and ECOWAS parliaments, highlighting the importance of the event in light of Morocco’s bid to join the regional bloc.

“Morocco has made important steps towards integrating ECOWAS and the signature of this convention framework strengthens the Moroccan initiative,” he affirmed.

The president of the Moroccan House of Councilors pointed to the fact that Morocco is a major partner for ECOWAS countries. Benchamach recalled that the kingdom made on the top list of its foreign policy priorities strengthening economic, cultural, and human bonds with the African continent.

President Lo stated that “Morocco is a heavyweight in Africa and a transit zone to Europe.”

Lo explained that the meeting with the two Moroccan houses of parliament was an opportunity to exchange ideas about Morocco’s ECOWAS membership request and other issues related to environment ahead of the COP 23 conference in Bonn, Germany on November 6 and 7.

Meanwhile, the representatives of ECOWAS parliament met on Monday with the head of the Moroccan government Saad Eddine El Othmani.

After the meeting, El Othmani pointed out to the initiatives led by King Mohammed VI aimed at increasing Moroccan investments in West Africa, and the royal initiatives to assist human development in the regional through different programs and the sharing of Moroccan expertise in several fields.

The ECOWAS parliamentary delegation also met on Tuesday with the Moroccan Secretary of State for Foreign Affairs, Mounia Boucetta.

In June Morocco officially submitted a request to join ECOWAS during the organization’s summit in Liberia. Member states expressed their approval in principle of the membership request, but insisted the bid needed to be further studied to assess its implications.

In August, Tunisia followed in the footsteps of Morocco and announced it also wants to join the bloc.