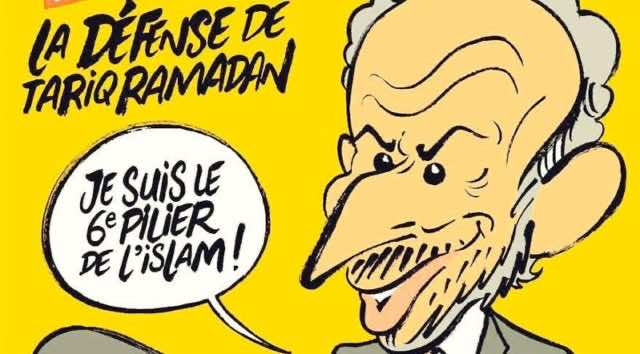 In its latest edition, titled “The Defense of Tariq Ramadan,” the magazine portrays  the Oxford professor – lately accused of multiple sexual assaults – with a comically large  erection, below a speech bubble that reads “I am the 6th pillar of Islam,” referring to his exaggerated phallus.

The drawing, signed by cartoonist Pierrick Juin, has became one of the top trending topics on social media in France, according to many local news outlets.

The caricature provoked strong reactions on social media, sparking a heated debate between those who saw the cover as offensive towards Islam, and others who praised the humor of Charlie Hebdo and the pertinence of its front-page.

[Once again, I choked on my coffee while seeing the cover of #CharlieHebdo on #TariqRamadan! Very very funny!]

[Those who pretend not to understand the humor of this week’s Charlie Hebdo cover are either dishonest or a lost cause.]

[Thank you #CharlieHebdo, this cover is just magical. The great @TariqRamadan undeniably respects the five pillars of Islam]

Others have contested the magazine’s obsession with Islam and its followers, claiming it ignored many current sex scandals committed by non-Muslims.

[I can not see the link between an alleged rape and Islam. Charlie Hebdo is true to itself: not funny, vulgar and disgusting.]

[A horrible Charlie Hebdo’s cover on Tariq Ramadan, they are really obsessed with Islam!!!]

[Lassalle and Eric Monier are accused of sexual abuse, Polanski of pedophilia. But Charlie Hebdo makes its cover on the only Muslim accused of rape.]

The satirical weekly has become infamous for its caricatures, especially those ridiculing Islam. In January, its offices became the target of a terror attack that killed 12 people in January 2015, after it caricatured the prophet Mohammed in several cartoons.

“Violent and aggressive, yes. But Rapist … I am stunned!”

In a matter of two weeks, three women have accused Ramadan of sexual harassment, assault, rape, and death threats. Henda Ayari, an ex-Salafi author, was the first woman to bring matters to justice, saying she was adamant to “carry this fight till the end, whatever the cost.”

But since the revelation of the case, Ayari was strongly attacked on social networks, as many supporters weaved conspiracy theories against the Islamologist, claiming to be founded by “jewish” bodies.

In response, Ramadan filed a suit against his accusers for “slander and defamation,” saying in a Facebook post that he “categorically rejects these false allegations.”

While Ramadan is presumed innocent until proven otherwise, the investigators will have to verify the accusations held against him,  as the plaintiffs provided medical records and recorded exchanges with the professor.

On October 31, Bernard Godard, a French official considered the “Monsieur Islam” of the French Ministry of Interior between 1997 and 2004, admitted to being aware of Ramadan’s “violent and aggressive” sexuality.

“That he had many mistresses, that he consulted sites, that girls were brought to the hotel at the end of his lectures, that he invited them to undress, that some resisted and that he could become violent and aggressive, yes, but I have never heard of rapes, I am stunned,” he told French magazine L’Obs.

Other women had already confided in recent years to journalists, who had gathered their testimonies without being able to publish them, since the victims, muzzled by fear, did not want to file a complaint. They all revealed being “threatened” by Ramadan.

For the time being, the investigation is on the hands of Paris’ prosecutor office.