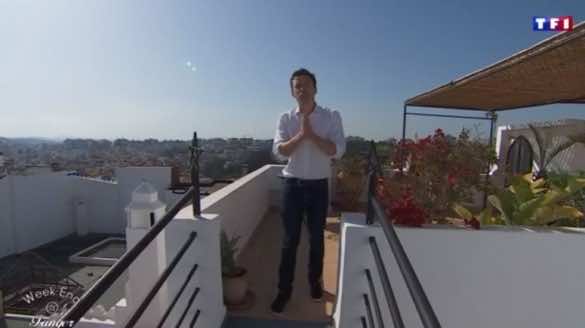 The travel reporter starts his journey by walking through the colorful, narrow streets of the city. His first stop is Tangier’s Kasbah in the medina.

While the buildings in the area appear old and worn down, the inside scenes are breathtaking. Ménage knocks on the door of the Abyssin hotel, where the camera makes a tour of its halls, rooms, and beach terrace.

The reporter then goes to the medina’s souk, where he gets a tour from Jean Olivier, a French immigrant who owns a restaurant and hotel in the city. Olivier left France 10 years ago in order to invest in the northern city. Roaming the place, the two men visit the fish souq and admire the freshly caught seafood.

Continuing his journey, Ménage goes to a handicraft shop, where silver and copper jewelry are made with precise techniques.

The journalist makes his way to a place where artisans beach towels are made on traditional looms. Ménage then takes tea at a local music cafe, where musicians play Andalusian songs. “Visitors can enjoy a Moroccan mint tea and local music for only EUR 4,” notes the reporter.

The French reporter concludes his journey at Cape Spartel, situated only 14 kilometers west of Tangier. The promontory marks the entrance of the Strait of Gibraltar, which connects the Atlantic Ocean with the Mediterranean Sea.