On this occasion, the King offered gifts to the Abu Dhabi Louvre, namely historical artworks dating back to the 19th century as a Holy Quran manuscript, a rifle, a sword and a pair of cedar wood stable door from Fez.

At the beginning of the ceremony, Sheikh Mohammed Bin Rashid Al Maktoum gave a speech in which he underlined that the Louvre Abu Dhabi is an addition to the human heritage, noting that the museum is a work of art that brings together the East and the West, an inter-civilizational bridge.

A symbol of tolerance and communion, this museum stands for “our capacity to fight evil forces of violence and hatred,” said Sheikh Mohammed Bin Rashid Al Maktou, calling for a genuine inter-civilizational coalition to preserve human civilization.

Afterwards, President of the Republic of France Emmanuel Macron gave a speech in which he said that the Louvre Abu Dhabi, fruit of an agreement inked in 2007, is an exceptional architectural work of art, affirming that this “Louvre of desert and light is a bridge between generations, cultures and East and West.”

“By bringing together these masterpieces with other masterpieces from Arab antiquities, Islamic art, pre-Columbian art, and Chinese art, with artists from beyond ages as contemporary artists from Morocco, UAE and China, we are contemplating an epic fresco of civilizations coming together,” said the French president.

The opening ceremony was also marked by musical and artistic performances.

First universal museum in the Arab World, the Louvre Abu Dhabi reflects through its 12 galleries (First Villages, First Great Powers, Civilizations and Empires, Universal Religions, Asian Trade Routes, From the Mediterranean to the Atlantic, The World in Perspective, The Magnificence of the Court, A New Art of Living, A Modern World?, Challenging Modernity, A Global Stage) the shared history of humankind via the different cultures and civilizations, embodies the dynamism of the contemporary Arab World and celebrates the region’s multicultural heritage.

The new museum, which boasts a permanent rich collection of over 600 artworks ranging from antiquity to present time, in addition to some 300 artefacts loaned from French museums, includes also a temporary exhibition area and other facilities.

The building is made up of a huge silver dome that weighs around 7,500 tons. It features a geometric structure of 7,850 stars and as the sun passes above, its lights filters through the perforations in the dome to create an inspiring effect within the museum known as the “rain of light”, inspired by the palm trees of Abu Dhabi.

The opening ceremony was also marked by the presence of Hamad Bin Isa Al Khalifa, sovereign of Bahrain, President of the Republic of France, Emmanuel Macron and his spouse Brigitte Macron, President of the Islamic Republic of Afghanistan, Mohammad Ashraf Ghani, as well as top officials from several Gulf countries. 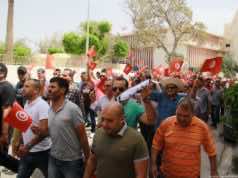 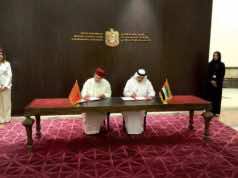