What started as media speculations during the visit of Russian Prime Minister Dmitry Medvedev are turning out to be more than mere rumors.

Last October, the two countries signed 11 agreements, and while Medvedev announced Russia’s decision to “deliver military equipment” to Morocco, the prime minister did not disclose the nature of these products.

As talks about purchase of military weapons were widely relayed by local and international media, it is the Russian press that confirmed the news yesterday, by announcing that Morocco will soon acquire S-400 batteries.

The anti-aircraft and missile defense system includes radars that would be able to shoot 80 targets and control up to 160 missiles, explained the source. This new asset will provide an edge to Morocco’s army defense capabilities, as the Russian system has a range of 400 kilometers and can shoot down up to 80 targets simultaneously, aiming two missiles at each one.

The S-400 can also destroy stealth aircraft, cruise and ballistic missiles, drones and other airborne surveillance systems at a 3,500-kilometer distance, at a speed of 4.8 kilometers per second.

The launch data is then sent to the best-placed launch vehicle, which it releases surface-to-air missiles. The engagement radar helps guide the missiles towards the chosen target.

While the cost of this new deal have not been disclosed by the source, in September, Turkey had acquired the same S-400 anti-aircraft missiles at EUR 2.14 billion. Turkey is not the only one to possess this type of weapon. Algeria and China also acquired the Russian missiles, while Saudi Arabia and India are planning to purchase it as well. 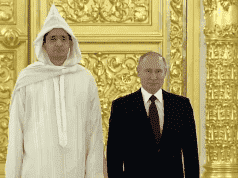