Rabat - “Get out [from France] with your flags!” This is how Julien Sanchez, National Front Party (FN) spokesperson lashed out at Moroccan fans in Paris who were celebrating the qualification of the national team for Russia’s 2018 World Cup.

Rabat – “Get out [from France] with your flags!” This is how Julien Sanchez, National Front Party (FN) spokesperson lashed out at Moroccan fans in Paris who were celebrating the qualification of the national team for Russia’s 2018 World Cup.

After the Atlas Lions’ historic win against Cote d’Ivoire on Saturday, Moroccans across the world, including those in Paris, took to the streets to celebrate their team’s victory. However, their festivities were not to the liking of the French National Party, known for their racism and unfriendly policies towards immigrants.

Sanchez, with who is also FN mayor of Beaucaire in the southern Gerard department, had his own words to deliver about the Moroccan enthusiast.

“Fed up with this disrespectful immigration. Get out with your flags!” Sanchez, who is an immigrant of Spanish descent, wrote on his official Facebook account referring to Moroccan fans, before deleting his post. 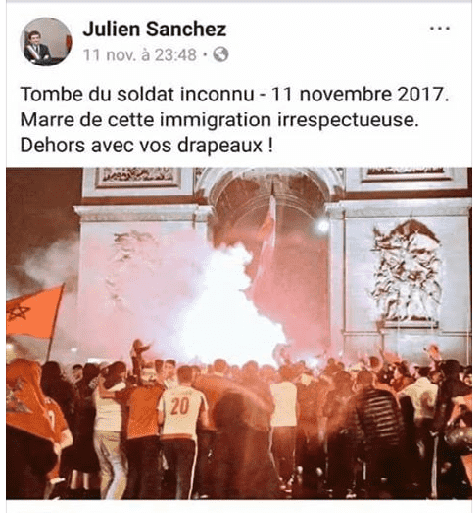 In a second Facebook post, FN spokesperson shared a video showing Moroccan fans celebrating their team’s victory. Sanchez captioned his post with a racist message.  “On November 11, France turned into a Moroccan souk. What is the Minister of Interior doing?”

This is not Sanchez’s first attack on Arabs and Moroccans in particular. In September, the French politician expressed in a video his opposition to teaching Arabic to children of the Muslim community in France.

Sanchez said that teaching Arabic is conducted by teachers not trained in France but in countries such as Morocco. He has also accused Morocco of “becoming in recent months a country of origin for terrorist organizations, which exposes French schools to danger.”

“We are asked to secure our schools, but we don’t know exactly who penetrates in them,” he added.

Morocco from where originates a large segment of the immigrant community in France. 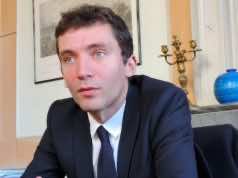