Rabat - Introducing the first “blockade breaker”: this is how the Qatari daily Al Arab welcomed King Mohammed VI after he landed in the Gulf country on November 12 amid a Saudi-led blockade. 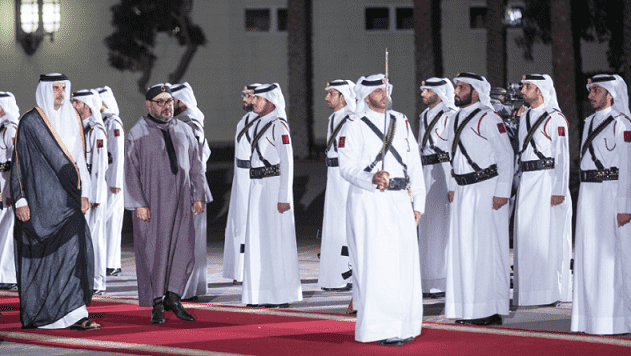 Rabat – Introducing the first “blockade breaker”: this is how the Qatari daily Al Arab welcomed King Mohammed VI after he landed in the Gulf country on November 12 amid a Saudi-led blockade.

“Welcome King Mohammed VI, Blockade Breaker” – This is how the Qatari daily Al Arab welcomed the King after he landed in the Gulf country on November 12 amid a Saudi-led blockade.

Qatari citizens and their media have enthusiastically greeted King Mohammed VI for his special visit, which is intended to discuss “the excellent relations between the two brotherly countries,” reported Maghreb Arab Press (MAP).

Many Qatari citizens have taken to their Twitter accounts, launching the hashtags #Blockade_Breaker and #KingMohammedVI in order to express their gratitude for the sovereign’s mediation to resolve the unprecedented Gulf crisis.

“A respected King with a strong opinion and a great people. They all gathered in a single country.#Morocco.” wrote one of the Qatari netizens on his Twitter account.

“I feel optimistic when I see the Quran verse used by Morocco as its motto – O you who have believed, in case you vindicate God, He will give you victory and confirm your feet.” said another Qatari Twitter user.

“Thank you to the Moroccan people and King Mohammed VI for your good stand with us [Qatar]. We will not forget your generosity and your noble morality, ”

“All respect and appreciation to King Mohammed VI of the brotherly country Morocco, the country of generosity.”

Since the beginning of the Gulf crisis, Morocco has declared its neutrality and expressed its readiness to mediate between the different parties and help them end their diplomatic rift.

The King’s visit has not only attracted the attention of Qataris , but also of Moroccan social media users.

“Although our brotherly country Qatar is neutral regarding the Moroccan Sahara issue, and not on our side, our precious King do not treat people similarly. God Bless our King,” wrote a Moroccan Twitter user.

This is King Mohammed VI’s first visit in Qatar since June, when the several Gulf nations severed diplomatic ties with Qatar, triggering a region-wide diplomatic crisis. The ongoing Gulf crisis has pitted Qatar against a quartet of its neighbours: Saudi Arabia, the United Arab Emirates (UAE), Bahrain, and Egypt.

Before landing in Qatar, the monarch paid a friendly and working visit to the United Arab Emirates (UAE) on November 7.

“First direct flight from #UAE to #Qatar since the triple embargo,” wrote another Twitter user.