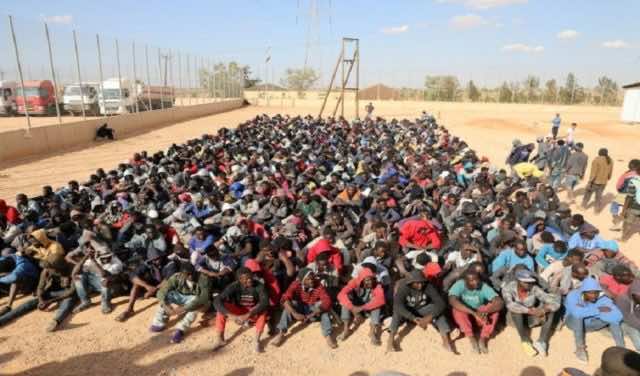 Rabat – Many sub-Saharan migrants transiting through Libya to gain access to their “European Eldorado” are being sold and auctioned at “slave markets” in Libya, reveals a video made public by the American channel CNN earlier this week.

After obtaining a footage of a migrant auction in Libya, the CNN journalists went on a field mission near the capital Tripoli to conduct an investigation and verify its authenticity.

The video dating back to last August, featured a number of sub-Saharan African men being auctioned like merchandise.

In October, the journalists managed to secretly film a similar auction taking place in a region not far from Tripoli in the middle of the night.

In the garden of a suburban house, they witnessed the auction of 12 young men from Nigeria, sold to the highest bidder.

The transaction was concluded quickly and the “slaves” were handed over to their “masters,” leaving the journalists  in a state of shock.

After the auction, the American journalists went to a migrant detention center in Tripoli, where they met Victor, a former slave.

“I was sold, like a lot of people here, look at their bodies, they were beaten and sometimes mutilated,” said the young man.

“They were so traumatized by what they have been through that they could not speak, and so scared that they were suspicious of everyone they met,” reports CNN.

Contacted by CNN’s team about the auction of sub-Saharans, a Libyan official said that they “hear rumors but nothing is happening” in front of them.

Following the broadcast of the video, many people have expressed their anger and indignation on social networks over the inhuman practice.

The Libyan authorities have assured that they will open an investigation, which was welcomed by many entities.

According to CNN, auctions exist at nine locations across Libya, but many more take place each month. Moreover, the auction sites are not all controlled by the the Libyan Government of National Accord (GNA).

Smuggler are taking advantage of the chaos in Libya to illegally cross the sea to people in exile. According to The Guardian, more than 120,000 people have arrived in Europe by sea so far this year and most departed from Libya bound for Italy.

At least 2,385 migrants have died attempting the perilous crossing of the Mediterranean sea since the beginning of this year, said the International Organisation for Migration (IOM).