Rabat - After an intense month of consultations, heated debates, and wild speculations, the European and African Unions have finally cleared up the imbroglio about the participation of the so-called Sahrawi Arab Democratic Republic (SADR) in their upcoming joint summit. 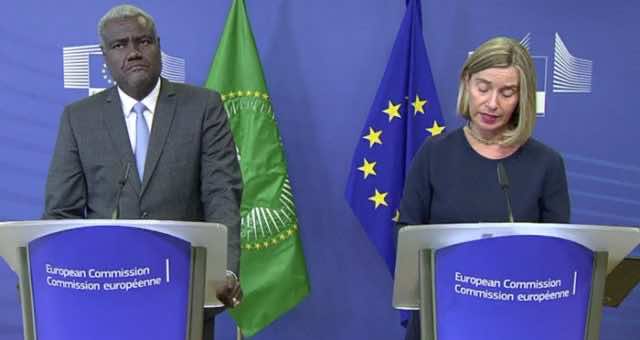 Rabat – After an intense month of consultations, heated debates, and wild speculations, the European and African Unions have finally cleared up the imbroglio about the participation of the so-called Sahrawi Arab Democratic Republic (SADR) in their upcoming joint summit.

During a joint press conference held November 22 in Brussels, Vice President of the European Commission Federica Mogherini and her African counterpart Moussa Faki Mahamat announced the official participation of the Sahrawi separatist front in the summit, to be held November 29 and 30.

For the EU, it was necessary that all countries of the AU be present at the summit in Abidjan, declared Mogherini. Regarding the previous debates on the participation of the self-proclaimed SADR at the event as a “complicated” matter, Mogherini lauded Faki’s “extraordinary capacity in solve the issue.”

However, the vice president stressed that this decision “does not change our position on Western Sahara.”

Would this mean that the question is definitely settled? At the level of the African Union, “we have solved the problem, and all AU members will take part,” affirmed Faki, while refraining from referring to the Polisario as a “member state.”

According to Faki, welcoming the separatist front in the summit is a decision that Morocco has agreed on. “During my meeting with King Mohammed VI in Morocco, we discussed the matter, and I believe that from this point of view the position of the AU is accepted by all of its members,” explained the chairman of the AU Commission.

On October, Faki was charged by the AU Executive Council to reach consensus on SADR’s participation in the summit. The chairman then began consultations with the incumbent AU president, Alpha Conde, Ethiopian President Alassane Ouattara, and the European Commission before traveling to Rabat early November, where he was received by King Mohammed VI.

But despite contesting the presence of the self-proclaimed SADR, Morocco will attend the summit, represented by King Mohammed VI himself. While the Royal Cabinet had not confirmed the possible displacement, sources revealed to pan-African magazine Jeune Afrique that the kingdom will face Polisario head on this November.

According to Le360.ma, King Mohammed VI is currently staying in Gabon, less than an hour and a half flight from Abidjan. The sovereign will also make a three-day work and friendship visit to Côte d’Ivoire starting December 1.