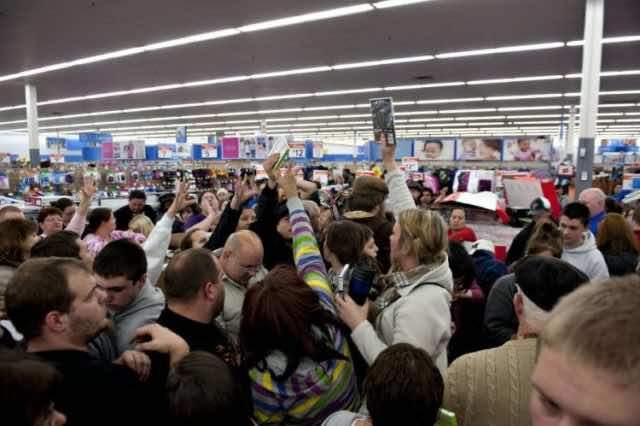 Rabat – Following the tragic stampede which took place on Sunday, November 19 in the commune of Sidi Boulaam, near Essaouira, Morocco, in which 15 people were killed and another 40 suffered injuries, I couldn’t help but reflect on the striking contrast between this event and the human stampedes which occur every year on “Black Friday” in the US.

When we see a tragedy of human lives being lost as in these two cases, everyone asks a number of questions: Why did it happen? What caused it? How can such a thing happen? Who is responsible? How can this be avoided in the future?

Human stampedes have occurred in many different circumstances and for different reasons: at religious events, sports events, concerts, sales, and also humanitarian actions. This reflection will only focus on the contrast between the stampede for a bit of food in Essaouira and the stampedes which happen every year at “Black Friday” all across the US for nothing more than consumer greed.

For anyone who isn’t familiar with “Black Friday,” this is a super sale the day after Thanksgiving.

Thanksgiving is always the last Thursday in November, and this always makes a four-day weekend. As this corresponds to the start of the last month before Christmas, it has become a tradition for stores to have a super sale on the Friday after Thanksgiving. Great idea, right? Meanwhile, “Black Friday” has become synonymous with human stampedes, violence, and even deaths. It is true that the death toll over the years hasn’t yet reached the 15 deaths of the one stampede for food in Morocco (10 deaths since 2006).

However, the case is nonetheless worthy of comparison, given the enormous difference in the circumstances, the reasons, and the motivation behind the stampedes.

Firstly, what is a stampede and why does it happen? A stampede is defined as a mass impulse among herd animals or a crowd of people in which the group collectively but uncontrollably begins running, often in an attempt to escape a perceived threat. In the animal kingdom the motivation for a stampede is always fear. Most human stampedes are also based on fear, as in emergency situations.

However, stampedes for the motivation of wanting something are strictly a human phenomenon. Here, with these two cases, we have a similarity in this motivation of wanting something when the demand is much larger than the supply, for example, a large crowd of people who all want something and have a very limited chance of getting it. It is also clear that there exists an enormous difference between them; in the human stampede in Sidi Boulaam, people were merely trying to get a bit of food, a basic necessity they needed, whereas in the yearly stampedes on “Black Friday” in the US people madly rush and trample the ones who fall only to get consumer goods at a cheap price.

Which of the two is more astonishing, and what does this say about the two cultures?

I’m a 57-year-old American expat who’s lived in Morocco for the last eight years, and of the two countries, I definitely prefer living in Morocco (we’ll come back to this later). Furthermore, I could never imagine participating in a “Black Friday” as amassing material possessions; being able to buy a flat screen TV at a 50 percent discount means very little to me at this point in my life. On the other hand, even though I’ve experienced poverty (both here in Morocco and in the USA), my pride has always prevented me from looking for charity.

This last Monday the 20, when all of Morocco and the entire world learned of the tragedy, I was discussing it with a Moroccan friend and we came to the question of “Why?” He said that it was because of the Moroccans’ education; that Moroccans don’t know what it means to respect others by waiting calmly in a line, that they always crowd and try to push their way to get their part or place. While this pushing and crowding is definitely my observation, something which has astonished me since my arrival, and something which many foreigners like myself really don’t appreciate, I can’t agree that this is the reason for what happened last Sunday.

If this was the reason for the stampede and the deaths, why is it the first time something like this has happened? If this were the reason behind the stampede, we could imagine that there would surely have been other cases of human stampedes, injuries, and deaths in Morocco. Furthermore, if this were the only reason, why is it that in the US, where people are formatted by the culture to wait patiently in line and respect others by not pushing and crowding, people turn into mindless disrespectful savages on “Black Friday”?

Therefore, we can’t say that the reason comes down to one’s education. In my opinion, while pushing and crowding may have played a role in the tragedy of Essaouira, we have to search for a deeper cause. What is so strong that it makes people abandon all civility and respect for anyone else to the point of trampling them to death?

If we look at human stampedes everywhere in the world, when they are caused by fear in an emergency situation, people are thoughtful, and they help each other, often even risking their lives. The converging point in these two cases is that people are so obsessed with their own desire that they become oblivious to the lives and wellbeing of others, focusing solely on attaining the prize. Where they differ is the nature of the prize and the underlying root of the desire.

This brings us to another question that everyone asks: Who is responsible? Whenever lives are lost, we search for someone to put the blame on.

People in Morocco immediately started asking “Who runs the charity that was distributing food?”.

King Mohammed VI called for an investigation, as well as a framework for the strict supervision of aid distributionwhich would guarantee the safety of the citizens. The governor of the province of Essaouira has been summoned to a hearing as part of the investigation. We learned that the Imam Abdelkebir Hadidi, the owner of the humanitarian association, was also summoned, that the operation has been an annual event for many years with only minor difficulties, and that the local authorities had been informed.

We can hardly put any blame on the imam, as he was only trying to help people in need. How can we put any blame on the governor either, as there has never been a precedent, and no one, the governor nor anyone else, could have imagined the horror which was going to take place. So who is to blame? Perhaps in this circumstance we should be asking what have we learned and how can it be avoided instead of searching for a guilty party. Perhaps there is no one guilty party.

One could also hypothesize that the underlying situation of poverty in the country is to blame because it created an overbearing urge in people to rush madly for a bit of free food. In this case the needs to be addressed are the economic situation and the poverty rate, and subsequently we could say that the government is to blame.

Looking at the other case at hand, “Black Friday,” there was a very famous death we can use to compare the idea of responsibility. In 2008, Jdimytai Damour, an employee of Walmart in Long Island, was trampled to death by a human stampede. Hundreds of deal seekers had been waiting in line all night for heavy discounts on a limited number of TVs, iPods, DVD players, and other tech items. They forced the doors five minutes before the opening time. Four other people were injured, including a pregnant woman who said Damour had tried to help her before he was trampled.

A year after, felony reckless endangerment charges were filed against Walmart. However, Walmart agreed to pay nearly USD 2 million to settle the case out of court and avoid criminal prosecution. That settlement included a mere USD 400,000 to compensate Jdimytai Damour’s family and the injured victims. But the story wasn’t over…the US Occupational Safety and Health Administration concluded that Walmart had committed a “serious violation” of rules requiring employers to make sure their workers are safe from hazards. Walmart, with the best lawyers money could buy, went on to spend nearly six years and more than USD 1 million battling against a USD 7,000 fine and federal citation, a battle which they finally lost. So, we can say that Walmart was responsible for the death of one of their employees, because they failed to ensure his safety.

In the case of Essaouira, can we also say that the authorities were responsible for the same reasons? I believe not, as there had been no precedent, whereas with “Black Friday” there was. It is of course a good thing to create a framework for the distribution of humanitarian aid which will protect the lives and safety of the citizens as the King Mohammed VI has ordered, but does this address the underlying problem? With a global food crisis less than a decade away according to experts, what will happen when the masses are confronted with not having enough food to go around?

Poverty is rampant and despite the growth of the GDP, as the gap between the rich and the poor grows ever wider. These are the real underlying issues that we have to face.

In the eight years that I’ve lived in Morocco, I’ve witnessed the way people take care of each other, which is one of the reasons I love this country. It makes my heart bleed to see that one person’s well intended act has ended in such a tragedy. Still, everything has a reason for happening, even if we don’t understand it. Perhaps at the very least we can take it as a wake-up call.

Today it is once again a “Black Friday” as usual in the USA, and there will be more stampedes, because the masses in the USA have been convinced by their consumer culture that having the latest smartphone is vital, at the same place on Maslow’s pyramid as our basic physiological needs such as food and water. Thus, it has become more important to them than the next step of the pyramid, which is safety.

Today in Morocco we are still mourning our Black Sunday. I hope that we will never see human stampedes and deaths for the sake of discounted hi-tech in Morocco, and I also hope that Moroccans will take this tragedy as a lesson so that it will never be repeated.