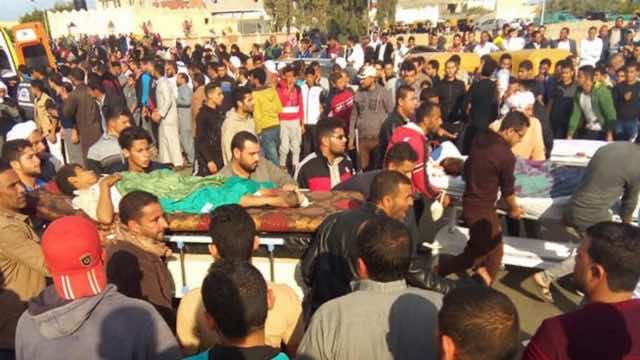 Rabat – The death toll from the attack on a mosque in Egypt’s Sinai has risen to 305, including 27 children, and 128 wounded, according to the latest record provided on Saturday by the country’s chief prosecutor, Nabil Sadeq.

The masked terrorists unleashed a suicide bomb before opening fire during the Friday prayer on the worshipers, among whom were army conscripts.

A leader of a Bedouin group fighting ISIS told AFP that the mosque was known as a gathering place for Sufis, followers of a mystical stream of Islam considered heretical by the jihadist group.

The Egyptian prosecutor said in a statement that about 30 armed men carrying the black banner of the group jihadist Islamic State (ISIS) took part in the massacre.

Following this attack, one of the bloodiest in the country’s modern history, Egypt began this Saturday a national three-day mourning.

President Abdel Fattah Al-Sisi has called on the armed forces to build a memorial to those killed at the mosque, reports state media.

“The armed forces and the police will avenge our martyrs and restore security and stability with the utmost force,” said Al-Sisi in a televised statement.

According to the Independent, the airstrikes had destroyed vehicles linked to the attackers, who used machine guns and rocket-propelled grenades to mow down worshippers during the Friday prayer.

This attack on the mosque, an extremely rare occurrance in Egypt, left the country in shock.

The grand Imam of Al-Azhar, the premier religious authority in Egypt, Sheikh Ahmed el-Tayeb, himself a Sufi scholar, condemned in the strongest terms “the barbaric terrorist attack.”

“The shedding of blood, the violation of the sacred houses of God, and the terrorizing of worshippers are acts of corruption on the earth,” he said.