Rabat - King Mohammed arrived this Sunday afternoon in Abidjan for a “working and friendship” visit to the Republic of Côte d'Ivoire. The visit will be followed by the King’s participation in the upcoming 5th EU-AU Summit. 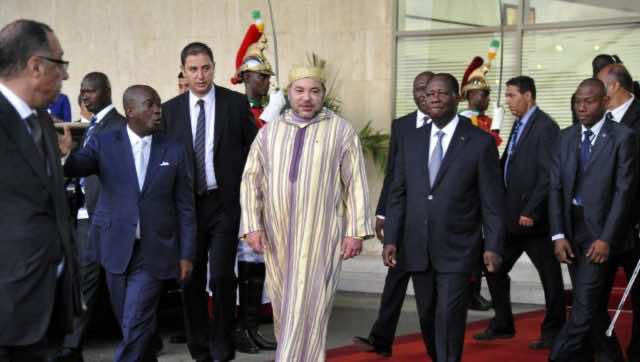 Rabat – King Mohammed arrived this Sunday afternoon in Abidjan for a “working and friendship” visit to the Republic of Côte d’Ivoire. The visit will be followed by the King’s participation in the upcoming 5th EU-AU Summit.

The King, whose last trip to Côte d’Ivoire dates back to February-March 2017, is accompanied by Prince Moulay Rachid and Prince Moulay Ismail.

The EU-AU Summit will be hosted by Côte d’Ivoire on November 29 and 30, despite the contested presence of the self-proclaimed Sahrawi Arab Democratic Republic (SADR).

The announcement was made public by the Ministry of the Royal House, the Protocol and the Chancellery.

The working visit came a few days ahead of the contentious European Union-African Union Summit in the Ivorian capital.

After its long empty seat policy during African summits, Morocco will face Polisario head on, with King Mohammed VI leading the Moroccan delegation.

Upon their arrival at Abidjan Felix Houphouet-Boigny International Airport, the monarch and the two princes were greeted by the Ivorian president Alassane Dramane Ouattara, who was accompanied by the First Lady of Côte d’Ivoire Dominique Claudine Ouattara.