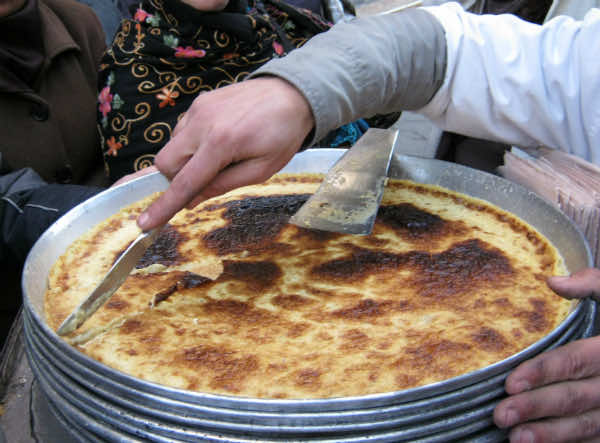 Rabat – While hanging around in northern Morocco’s streets, you will likely come across small wood wagons pushed by sellers shouting, “Warm Kaliente, hot and delicious.”

The scene is one of the ordinary life aspects in the kingdom’s north, where Kaliente, a popular dish made from chickpea flour, oil, and eggs, is sold by the slice on the streets or in the community bread ovens.

The Moroccan street food, which sometimes enjoyed with a baguette and sprinkled with salt, paprika, cayenne pepper, and cumin, is always served hot. This explains the origin of the food’s name which is taken from the Spanish word “Caliente,” meaning “hot.”

Many Names, a Single Origin?

Historians have not been able to pinpoint the date of Kaliente’s appearance in Morocco, and so the origin of this dish is still much debated yet without a definite answer.

“This smooth chickpea flour pie made its way to the city of Tangier during the international zone years,” said history researcher Khalid Tahtah. “Some Spanish books mentioned the dish, casually, and attributed its origin to Jews of Spanish and of Eastern Europe who lived in Tangier after the end of the Second World War.”

“It is doubtless that they were facing a difficult financial situation which led them to sell this product to earn a stable income,” stated Tahtah.

He stressed that the dish can be found also in the eastern Morocco, called ‘Karane,’ which is “thicker than the one sold in Tangier.” According to Tantah, Kaliente is an Algerian street food too, known as “Karantica.”

This traditional food is also sold in the city of Fez, under the name of ‘Chalawane’, and its ingredients are similar to those used in Salient.