Rabat - The fruits of the Morocco-China Memorandum of understanding on the “One Belt One Road Initiative” are already in sight. The kingdom is breaking the ground for Chinese business men to invest in Africa. 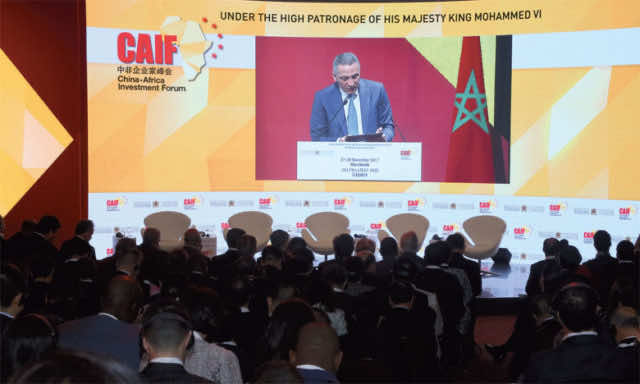 Rabat – The fruits of the Morocco-China Memorandum of understanding on the “One Belt One Road Initiative” are already in sight. The kingdom is breaking the ground for Chinese business men to invest in Africa.

Opened on Monday in Marrakech, China-Africa Investment Forum (CAIF) has brought more than 500 Chinese and African economic decision-makers around discussions on potential partnerships and corporations.

The Morocco-China economic alliance is in full swing.  “The Chinese and Africans share the same intention for development. The Silk Road Initiative will change the map of international trade,” said Minister of Industry Moulay Hafiz Alami.

Entitled “Opening a new chapter of the economic partnership,” this momentous event, co-organized by the Moroccan Ministry of Industry, Investment, Commerce and the Digital Economy, the Jeune Afrique Media Group, and BOAO Business Consulting, addresses the necessary conditions to empower the Chinese-African economic partnership so that it reaches its full potential.

The CAIF aims to promote business meetings between the main actors of trade and investment between China and Africa and to promote the creation of sustainable partnerships with high added value, especially in the industrial sector.

“The world is witnessing a profound and complex transformation of a global industrial transition,” Alami said.

“Africa has a surplus of natural and human resources,” said Wang Yong, the vice president of the China-Africa Development Fund and a standing committee member of the Nineteenth Congress of the Communist Party of China

At the same time, the forum will encompass workshops explaining Chinese and African economic policies and operational environments.

Morocco is the first African country to join the “One Belt One Road” initiative. In a speech to the Summit of the Forum on Sino-African Cooperation in December 2015, King Mohammed VI welcomed the Chinese president’s launch of the development program.

Wang encouraged the two countries to implement the consensus reached by their leaders to promote bilateral strategic partnership.

On the basis of the MoU, China will cooperate more with Morocco on trade, investment, military and security, culture, education, and tourism.

Other areas of corporation will also include major international and regional issues and joint action safeguard common interests of developing countries.

Through the One Belt One Road MoU, Morocco will offer a number of assets to contribute to the enrichment of the initiative.

In less than 20 years, China became the first economic partner with Africa. Trade between the two sides reached USD 190 billion in 2016 and is more important than trade with India, France, and the United States combined, according to figures distributed during the forum