Rabat - It didn’t take long for French President Emmanuel Macron’s African tour to go awry. What was anticipated as the French leader’s “grand test” quickly turned to a possible diplomatic crisis after he “humiliated” Burkina Faso’s President Roch Marc Christian Kabore at the University of Ouagadougou. 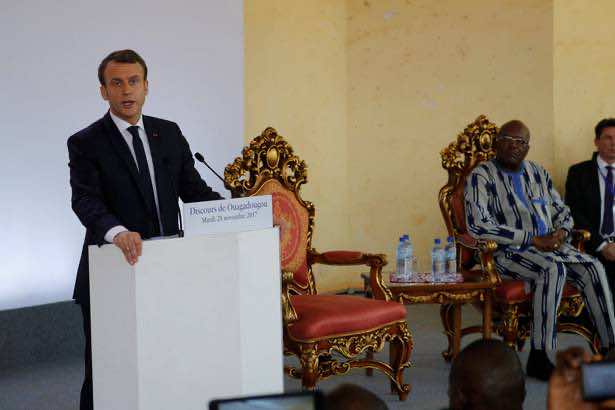 By
Chaima Lahsini
-
Chaima Lahsini is freelance journalist and activist with the Al-Fam collective in Rabat.
Nov 29, 2017
Spread the love

Rabat – It didn’t take long for French President Emmanuel Macron’s African tour to go awry. What was anticipated as the French leader’s “grand test” quickly turned to a possible diplomatic crisis after he “humiliated” Burkina Faso’s President Roch Marc Christian Kabore at the University of Ouagadougou.

Macron’s meeting with some university students quickly turned into a scene from the French classic Le Diner des Cons, and apparently, Kabore is not a big fan of French humor.

First, as the president arrived, some Burkinabés expressed their cold reception of the meeting by throwing stones and one grenade at the French delegation and army motorcade.

Then,  a speech intended to found a new relationship with Africa soon veered into a nightmarish miscommunication for the leader of the republic.

Answering a student’s question during the Q&A session about electricity cuts in the university, Macron was unable to abandon his famous pedagogical tone, oscillating between humor and quasi-irritation.

“You are talking to me like [France] is still a colonial power,” the French president said.

“But I do not want to deal with electricity in universities in Burkina Faso!” he added, smiling.

Encouraged by a mix of laughter, applause, and whistling in the audience, the French leader carried on. “This is the job of the president [of Burkina Faso!” he said, pointing at Kabore, who was listening to Macron’s speech a few steps away.

At this point, Kabore suddenly stood up and left the stage, which prompted further comments from the French president. “He’s leaving… Stay there! So, he went to repair the air conditioning,” Macron shouted after the African state leader.

Perhaps not so surprisingly, the video posted on Macron’s Twitter account has been edited to exclude his comments addressed to Kabore.

Claiming to be part of “a generation that does not come to tell Africa what to do” and emphasizing that “there is no more African policy of France,” Macron tried to get rid of the sometimes paternalistic image painted of France in Africa. But judging by the reactions on social media, Macron might be off the mark this time.

For many, the peculiar behavior of the French president and his “humorous intervention” was more of a “small diplomatic incident.

Macron came close to a diplomatic incident: “You speak to me as if I were the president of Burkina, but I do not want to deal with electricity in your schools, it is the work of the president” Kaboré, who leaves the room.

Arrogance and grim immaturity on the part of #Macron facing the Burkinabe head of state. One can agree on the message, but the form is unworthy of the function. #Ouagadougou

Imagine a foreign country president having such an attitude in France and saying the same thing to Macron. Such paternalism and lack of respect of his counterpart! nothing new !!!

A Side Note on Debating Macron’s Insolence