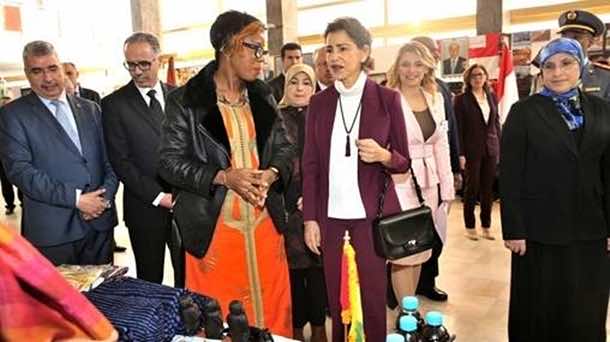 In a speech on the occasion, president of the diplomatic circle and spouse of Hungary’s ambassador in Rabat Szilvia Tomler Visihanyo thanked Her Royal Highness for her strong support for social projects undertaken by the Circle.

She also voiced her gratitude for Princess Lalla Meryem for this “precious help meant to assist poor women and children,” underlining that the bazaar brings together several countries, organizations and associations representing different religions, histories and cultures working towards the same goal: helping underprivileged women and children.

The Diplomatic Bazaar 2017 edition was marked by a presentation to the Moroccan Princess of a preview of the Children International Circle, which includes around 40 kids aged 8-16. These children are driven by a spirit of solidarity to share ideas that could lead to conducting charity projects during their stay in Morocco.

The bazaar is an annual event organized by the Diplomatic Circle in Morocco to celebrate friendship and solidarity, an important means to support Moroccan NGOs involved in the fields of education, health and women’s development in rural areas.

Over 30 countries are taking part in this edition via their ambassadors, with the Moroccan club of ambassadors’ spouses and the diplomatic foundation as guests of honour. The Rabat diplomatic circle, set up 30 years ago, is a charity association including spouses of heads of diplomatic missions and representatives of international organizations accredited in Morocco.