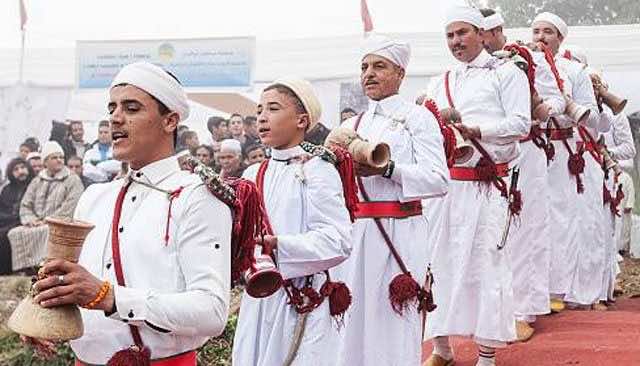 By
Chaima Lahsini
-
Chaima Lahsini is freelance journalist and activist with the Al-Fam collective in Rabat.
Dec 6, 2017
Spread the love

Practiced by all the tribes of this area of the Moroccan Atlas, the Taskiwine dance takes its name from “Tiskt,” the richly decorated powder horn worn by each dancer on the left shoulder.

This inscription as intangible heritage aims to help safeguard this historical art, which has been threatened by various factors, according to UNESCO, notably “globalization, the growing denigration of traditional heritage practices by young people and a decline in crafts associated with dance.”

The Taskiwin’s dance requires the participation of about 20 men. The dance evolves in the form of a theatrical presentation: each act of dance acts out a warlike episode, whether by gestures or by the rhythms adopted.

Taskiwine is the art of vibrating the shoulders in synch with the rhythm of the tambourines. The men wear powder horns and red shoulder straps and dance with rhythmic steps, characterized by frenzied movement.

The mellow tone of flute who signals the passage from one rhythm to another and from one act to another under the orchestral guidelines of the Raïs, the maestro of the dance.

Predominantly a male dance, Taskiwine often turns into a group celebration in its more relaxed moments when the unmarried girls take up their own dance and songs. At this stage, the dance abandons its warrior connotations to allow the dancers to express themselves in a joyous and free way.

The prose of the music is also a prominent aspect of Taskiwine. A vector of exchange between the dancers, the lyrics evoked by its rhythms, its martial gestures and its sounds echo the principles of heroism, strength, courage, and bravery. The prose also relates the different episodes of a war in a harmonious way by hinting at different aspects of combat: anticipation, taking positions, assault, withdrawal, and victory.

The Taskiwine dance also reflects the importance given to the cohesion of the tribe. Its rhythm invites dancers to renounce themselves in favor of the continuity of the group.