Rabat - French President Climate Change has delivered on his promise to “Make Our Planet Great Again.” In a sharp referral to Trump’s “Make America Great Again,” Marcon granted a EUR 60 million fund to 18 scientists, 13 of which are American, to counter Trump’s policy in the environmental scene. 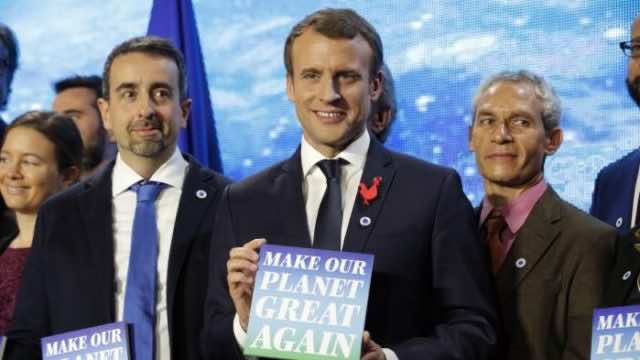 Rabat – French President Climate Change has delivered on his promise to “Make Our Planet Great Again.” In a sharp referral to Trump’s “Make America Great Again,” Marcon granted a EUR 60 million fund to 18 scientists, 13 of which are American, to counter Trump’s policy in the environmental scene.

Early June, President Trump announced that he would withdraw the United States from the Paris climate agreement, which in his words is a “hoax.” The decision set off worldwide criticism and condemnation.

Macron took the matter to heart. Soon after the U.S announcement he hurled into a social media campaign, offering a “second home” to American scientists concerned about the political climate and global warming.

France also unveiled that it was offering 3- to 5-year grants, worth up to EUR 1.5 million, appealing to 50 foreign climate scientists. The “Make Our Planet Great Again” has now amounted to EUR 60 million in direct funding and in-kind support, reported Sciencemag.

On the eve of the Climate Change, Macron announced the names of the 18 scientists who won the bid. The list includes prominent names, including climate researcher Camille Parmesan, who was granted a share of the 2007 Nobel Prize for her contribution to the Intergovernmental Panel on Climate Change.

Though the list includes names from India, Europe, and Canada, many of the winners work at academic or federal government laboratories in the United States.

Macron’s initiative “gave me such a psychological boost, to have that kind of support, to have the head of state saying I value what you do,” said Parmesan, from the University of Texas.

“It can be embarrassing to try and explain what is going on at home right now,” said Louis A. Derry, a professor of Earth and atmospheric sciences at Cornell University in New York.

“For me, the chance to work on some very exciting science questions with my French colleagues and not be so dependent on the crazy stuff that goes on in Congress and with the current administration is honestly very attractive,” he added.

Trump Stays in the White House

More than 50 world leaders will be today in Paris for the One Planet Summit. Trump was not invited.

Jointly organized by France, the United Nations, and the World Bank in partnership with non-governmental organisations, the summit will mark the second anniversary of the adoption of the Paris Agreement.

Themed “Climate Change Financing,” the main focus of the summit is to take further action on climate, notably on the financial front to achieve the objectives of the Paris Agreement both in terms of reducing greenhouse gas emissions and protecting the environment of populations in the face of the consequences of climate change.