By Sana ElouaziRabat - A “mentally challenged” man ransacked the statue of a naked woman, made by French sculptor Francis de Saint-Vidal in the city of Setif, north of Algeria. Wearing a long white Camis and armed with a hammer and iron bar, the bearded man vandalized the 19th-century old Algerian monument. 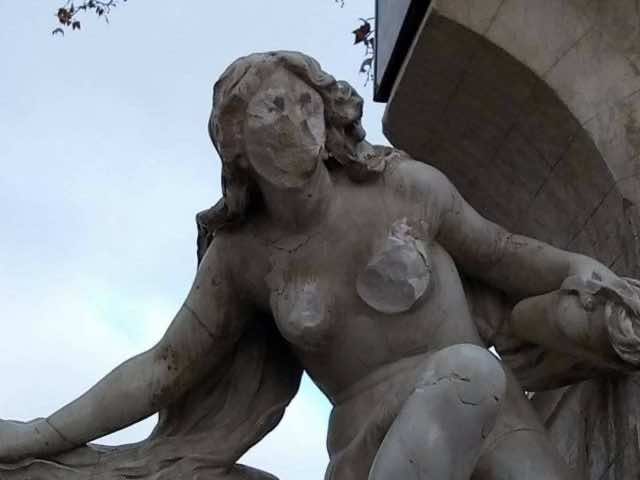 By Sana Elouazi
Rabat – A “mentally challenged” man ransacked the statue of a naked woman, made by French sculptor Francis de Saint-Vidal in the city of Setif, north of Algeria. Wearing a long white Camis and armed with a hammer and iron bar, the bearded man vandalized the 19th-century old Algerian monument.

Several videos of the incident quickly circulated on social media, featuring a bearded man, dressed in qamis, a traditional Muslim clothing, while destroying the emblematic statue placed on the top of the fountain Aïn Fouara.

In one of these videos, the 34-year-old man is shown hysterically looting the statue’s face and breasts using a hammer and an iron bar, before being arrested by police, local media reported on December 18.

Many passersby tried to stop him, some by throwing stones at the vandal. Two police officers eventually climbed the statue, one of them sneaking behind him while the other tried to distract him. Both were victims of the man’s erratic blows, before finally managing to restrain and then arrest him.

According to local police, the alleged perpetrator is a 34-year-old man from Beni Hocine commune, about 35 kilometers from Setif, and suffers from a “mental disorder.”

On social media, many have deplored this act, accusing the man of being a “salafist” and a “frustrated Islamist dog.”

Others have associated this decivilizing act of destruction to similar acts perpetrated by the Islamic State organization, that previously caused damage to significant cultural heritage sites in Syria and Iraq.

However, this is not the first vandalism act that this female statue has suffered. In 1997, it was blasted by a homemade bomb amid the civil war that tore through  Algeria. But after an exceptional mobilization of Setif residents, the statue was repaired within 48 hours.

Despite being carved at the time of the French colonization, the sculpture is considered one of the most important landmarks of Algeria,  as residents of Setif often show their attachment to it.

The Algerian Minister of Culture Azedine Mihoubi, denounced in a statement the “hysterical behavior of the man who destroyed and disfigured the statue of Ain El Fouara.”

“The police has arrested the assaillant and justice will determine the reasons for this heinous and reprehensible act,” he added.

The minister, who is also from Setif, promised a “quick restoration of the damaged parts of this masterpiece.”

“Specialists are already on hand to determine the extent and nature of the damage in order to adopt the appropriate restoration standards,” he said.