Rabat - FIFA is proud of Moroccan football fans! The international football association has predicted that Moroccan fans will occupy numerous seats in the 2018 World Cup stadiums.

Rabat – FIFA is proud of Moroccan football fans! The international football association has predicted that Moroccan fans will occupy numerous seats in the 2018 World Cup stadiums.

FIFA took to its Facebook and Twitter accounts to express its pride for Moroccan fans, who are going to be “among the most numerous at the World Cup.”

On its Facebook page, FIFA wrote that “Moroccans will be numerous in Russia! Fans of the Atlas Lions are among  the most important buyers of the 2018 World Cup tickets.” 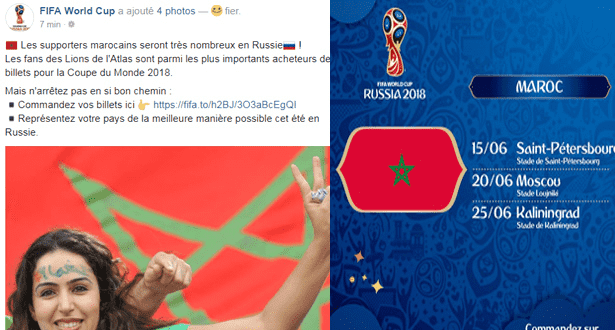 The association has also encouraged the fans to buy more tickets in order to attend the competition.

The Atlas Lions fans had an eminent role in their team’s qualification to the world tournament. During the World Cup qualifier games, the supporters showed great respect, confidence and support for their team in order to boost their enthusiasm and determination to qualify for the World Cup.

The fans were highly lauded for their support by the Moroccan team, its coach and the FRMF, the official Royal Moroccan Football Federation.

“I am delighted for all the Moroccan fans who have encouraged their national team throughout their appearances,” said Morocco’s team coach Herve Renard.

After a qualifier game against Gabon played on October 7 in Casablanca, Moroccan-Dutch star Hakim Ziyech told the press that “Casablanca’s fans are astonishing.” Morocco defeated Gabon with a 3-0 victory.