Rabat - Lost among the various debates about security, crises, and scandals of every imaginable nature is a piece of completely real news out of Morocco - the annual gathering of 300 ulema in early December, as part of Morocco's religious diplomacy program. 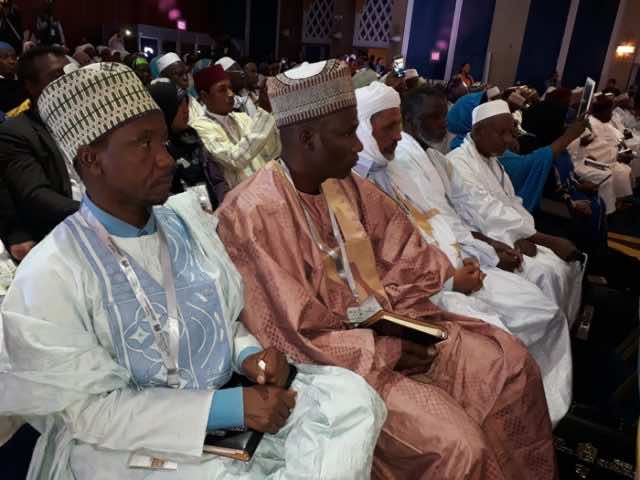 By
Irina Tsukerman
-
Irina Tsukerman is a New York based attorney, whose focus is on assisting human rights defenders, liberal democratic dissidents, and persecuted minorities, and who frequently writes about security issues, human rights, international affairs, and geopolitics.
Dec 20, 2017
Spread the love

Rabat – Lost among the various debates about security, crises, and scandals of every imaginable nature is a piece of completely real news out of Morocco – the annual gathering of 300 ulema in early December, as part of Morocco’s religious diplomacy program.

The aim of the gathering is to promote King Mohammed VI‘s vision of the spread of tolerant Islam, including the training of the imams from 32 African countries in Morocco, as well as bridge building between Morocco and other African countries. The gathering took place in Fez, the spiritual capital of Morocco, and featured 80 women, including 20 from Morocco. That news should be considered a major development and be plastered all over the front pages, yet received little attention from international, much less American media.

There are several reasons why this gathering is very important.

First, Morocco is doing what many of the critics of Islamism have been urging the communities in the United States and in Muslim majority countries do – engaging in reflection and examination of religious issues, and purposefully bringing the country in a direction where Islam is not incongruous with modernity.

Morocco seeks to lead in the vision of “tolerant Islam“, and to prevent proliferation of extremists in mosques by training imams in “best practices” of moderate traditions.  Indeed, that such a high number of women is participating in this gathering is a testimony to a different outlook from many far more conservative religious conferences we know of – including the recent Deobandi conference in Virginia, where the genocide of Ahmadiyya practitioners was one of the themes.

Training imams in Morocco as well as other African countries is the best preemptive tactic against the migration of foreign imams from far less tolerant traditions. So why is there no praise being heaped on Morocco for taking this important initiative in tackling the problem of extremism internally and in practical ways proven to be effective?

First, this eschews the need for fundraising for a variety of NGOs that claim that in the clash of civilization, only one side can win. What if the clash of civilizations is not between Muslims and everyone else, but between Islamist barbarians and everyone else? That seems a more likely interpretation of the concept, given that the majority of victims of Islamist violence are Muslims.

Indeed, if a Muslim state is developing a vision of the religion that everyone can live with, what about the hordes of Westerners on either side of the aisle whose claim to fame is fearmongering, either against any practice of Islam whatsoever or in favor of some absurd utopia where only the interpretation of Islam promoted by the Muslim Brotherhood and its affiliates is “genuine” and “authentic”?

Thus, surprisingly, Morocco’s success is an inconvenient truth for the media outlets which thrive on negativity and controversy rather than on practical and desirable solutions towards the violent plague that has been on front pages since 9/11.

The second interesting aspect to the story was the emphasis on the exploration of the cultural practices. First, very little import has been given to the fact that Morocco increasingly identifies itself with Africa, rather than with the Middle East. One practical consequence of this shifting identity, has been the rejoining of the African Union.

Another, has been a positive outlook to be placed with the African states rather than the Middle Eastern group by the US State Department. That should be a positive sign to those who have been particularly concerned about the effects of Arab colonialism in Africa, which had initially resulted in slave trade, which has not quite went away in countries like Mauritania, and now resurfaced in Libya.

Morocco seeks to distance itself from such associations, and on the contrary, celebrates the diversity of cultures within its own borders (which include descendants of slaves) as well as across the continent. That, too, is something to be celebrated in a particularly odd Western climate where both white and minority identity politics are triumphing over the identification with values and principles, and where concerns over cultural appropriation kill the joy of exploring and embracing many of the wonderful aspects of other groups, such as food, music, and craftsmanship, without also sacrificing your own.

Third, of great significance here, is the idea of intrareligious dialogue, almost forgotten in discussion over whether Islam can or should be reformed, as well as calls for interfaith dialogues. It is doubtful that non-theologians can weigh in with educated opinions on the issue of reforming any religion, particularly those sporting multiple schools of thoughts and centuries of tradition of precedent-based rulings and commentary.

Interfaith dialogues, well-meaning in plans, usually do not work out well in practice. Many practitioners are not familiar enough with their own religious traditions to speak with confidence on any topic of interest, and learning about a different religion without being able to engage on equal terms usual spells either a very short discussion or an eventual disengagement over matters of interpretation.

For that reason, many interfaith dialogue practitioners end up discussing politics, and quickly end up in a heated argument, for which one needs not have any particular religious affiliation. The intrafaith dialogue is what can make a difference, when hundreds of highly educated individuals from different schools of thought come together for a vigorous exchange of ideas.

These are the people who actually know enough to offer additional insights, reinterpretations, or, if there is ever a need to make a different ruling, can offer that with the legitimate understanding of sources, and the credibility among community or anyone reading the work, that is based in knowledge and education, rather than mere self-identification or a politically convenient label.

Finally, the religious institute mentioned in the article, the Mohammed VI Foundation for African Studies, promotes not only doctrines and schools of thought indigenous to Africa, but research and studies into Islam that can be used as learning tools for imams and scholars. This sort peace-oriented institution is something that is sorely lacking elsewhere.

The famed Al-Azhar University in Egypt produced the Dr. Al-Baghdadi (of ISIS infamy), no doubt, schooled well but in the worst possible interpretations of the traditions aimed to highlight the most close-minded worldview. And in the West, much of the higher learning in universities is sponsored by the Gulf States, whose Wahhabist tradition has not only contributed to generations of terrorists, but discouraged any questioning or debate.

For that reason, particularly Western students with poor grasp of classical Arabic, are frequently indoctrinated with carefully selected texts, none of which reflect the rich tradition of philosophy, discussion, and debates, nor diversity of thought among Islamic scholars. College students have no access to quality translations of anything that would challenge these positions. And mosques in Europe and the United States are frequently established or ran by poorly educated Islamists, who peddle self-selected and poorly vetted commentaries, hadiths, and texts, which of course, aim towards a particular political aim, rather than towards promotion of dialogue or thorough understanding of any thought.

Perhaps with the growth in popularity of this Institute, its scholars rather than Wahhabi supporters and Islamists, can travel to Western Universities, teach classes, and assist with translation of text that would transmit the full spectrum of Islamic learning to those, who wish to gain knowledge rather than propaganda.