Rabat - Karim, a three year old boy whose mother was killed in the violence in Syria, lost his left eye and suffered serious scars during  attacks on the besieged Damascus suburb of Eastern Ghouta.  A graphic photo of his injuries has sparked  a campaign of support on social media. 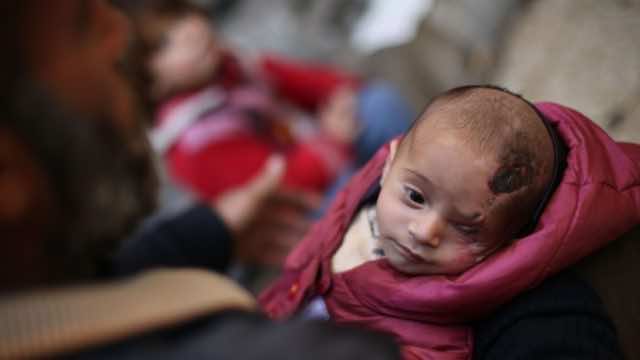 Rabat – Karim, a three year old boy whose mother was killed in the violence in Syria, lost his left eye and suffered serious scars during  attacks on the besieged Damascus suburb of Eastern Ghouta.  A graphic photo of his injuries has sparked  a campaign of support on social media.

Although Karim lost his left eye and suffered a serious head, he survived an attack in Eastern Ghouta’s Hammuriye district last Friday as he and his mother were shopping in the local fruit market. His mother, Fadiya, however, was killed during the clash, according to the Telegraph.

Karim’s picture inspired activists on social media take pictures showing their left eyes covered to express their solidarity with the boy, posting them with the hashtags #SolidarityWithKarim and #StandWithKarim.

“Syrian children stand in solidarity with Karim, who lost his eye and had his skull broken by the Assad regime shelling his home in Eastern Ghouta. His mother was also killed in the same attack,” Syrian journalist Hadi Al Abdullah tweeted.

I’m in solidarity with karim a syrian child two month-old, lost his eye and broke the skull of his head and lost his mother when they came under artillery bombardment of the Assad regime on the EasternGhouta
He lives alone without a mother.#SolidarityWithKarim

Dear friends , I stand with 2 months old baby Karim who lost his eye & mother in Syria . What is the crime of a baby? Please #StandWithKarim pic.twitter.com/IIWhSVRrIN

The team of @BILD joined the campaign #solidarityWithKarim that’s started by activists to stand with Karim a syrian child 2 month-old, lost his eye & broke the skull of his head & lost his mother when they came under artillery bombardment of the Assad regime on the #EasterGhouta. pic.twitter.com/cM1k8Gex2Z

When we sit around the #UNSC & warn that inaction will mean more people are going to die. More schools bombed. More children scarred. This is what we mean.

We must see an end to the bombardment & siege of #EasternGhouta.#SolidarityWithKarim pic.twitter.com/8Io85VlDdF

Karim’s father, Abu Muhammed  told the Andalou News Agency that life under the siege is a “nightmare,” explaining that his other children are helping to care for Karim.

“It is very difficult to find a proper job and a piece of bread  under these circumstances,” he said.

Rycroft said in the UN’s meeting on Tuesday that “Russia should use its influence over the Syrian government to facilitate the entry of food and other supplies into Eastern Ghouta, as well as the evacuation of the injured,” reported Al Jazeera.

“It’s just a thirty minute journey from Eastern Ghouta to Damascus to receive treatment,” he said, but “It really is a matter of life and death.”