Rabat - A new rebound in the Gdim Izik case. On Wednesday December 20, Sale’s Court of Appeal sentenced in absentia, Mohamed El Ayoubi to 20 years in jail with no remission. El Ayoubi was prosecuted for violence and aggravated assault against Moroccan officers as part of the Gdim Izik incidents. 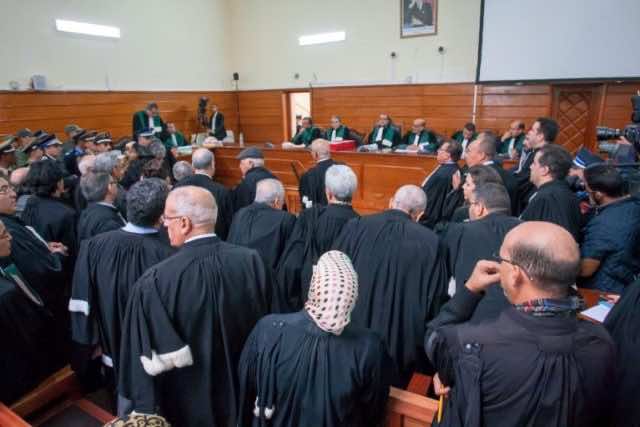 Rabat – A new rebound in the Gdim Izik case. On Wednesday December 20, Sale’s Court of Appeal sentenced in absentia, Mohamed El Ayoubi to 20 years in jail with no remission. El Ayoubi was prosecuted for violence and aggravated assault against Moroccan officers as part of the Gdim Izik incidents.

Last January, Sale’s court decided to separate the case of El Ayoubi from the other defendants. The accused was prosecuted on bail due to his health condition, which prevented him from attending the hearings.

The 62-year-old was arrested and jailed in November 2010, before being released on bail one year later for health reasons.

On July 19, the court handed verdicts ranging from two years in prison to life imprisonment against 23 suspects implicated in the dismantling of the Gdim Izik camp. The defendants were standing trial over the charges of “forming criminal gangs and violence against public forces that led to their death with premeditation, mutilation of corpses and complicity.”

The defendants had already been charged in 2013 by the military court with sentences ranging from 20 years to life imprisonment. However, after Morocco reformed its military justice system in July 2015, Rabat decided to bring these defendants back to a civil court.

Open to the press and international observers, the National Human Rights Council (CNDH) concluded in a report published in early November, that the trial was conducted in a “fair” way.

L’Association de Promotion des Libertés Fondamentales (APLF), an NGO comprising lawyers and law experts, had also sanctioned the Gdim Izik trial. On October, the NGO published a report about the trial of the 24 accused in the civilian court of Salé, which ran from December 26, 2016 to July 18, 2017, concluding that the conditions of the trial were “fair.”

Throughout the trial, explained the NGO, the defendants were “clearly informed” of the causes of their “accusation” of serious crimes of intentional violence, which caused deaths, injuries, and serious material damage.

“The trial sought to establish facts about the responsibility of each of the defendants,” said the APLF. In order to guarantee a fair trial, the General Prosecution, witnesses from among surviving victims, and members of the families of the victims and the defense of the accused all were able to speak before the judges.

Other international observers who attended the hearings also echoed the same findings. Pierre Legros, one of the lawyers of this panel said that “the judicial decision of the Court on this case leaves no doubt as to the relevance of the sentences handed down.” He pointed out that the Court examined at all times the facts attributed to each accused without being influenced by the pressures of the defense of the defendants.

Legros, who stressed “the profound significance of the retrial of this case before an ordinary Court,” said that foreign observers who had followed the trial closely for seven months are able to confirm that it was a matter of a “fair” judgment which has respected all the guarantees stipulated in the international Law.

The Gdim Izik incidents resulted in the death of 11 Moroccan officers and the injury of 70 others, in addition to four civilians, as well as great damage to public and private property.