Rabat - The 16-year-old Ahed Tamimi, who became the face of Palestinian resistance in the occupied West Bank,  was arrested by Israeli forces during  a raid on her home in the early morning of December 19. 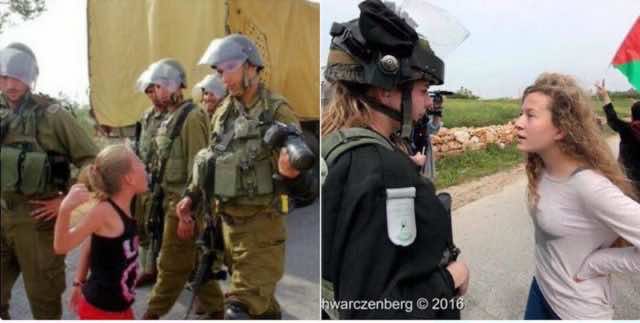 Rabat – The 16-year-old Ahed Tamimi, who became the face of Palestinian resistance in the occupied West Bank,  was arrested by Israeli forces during  a raid on her home in the early morning of December 19.

At 4 am, the Tamimi family, famous for their activism against Israel’s military rule on the lives of Palestinians in the Nabi Saleh village, were forcibly woken up by a least 30 occupation soldiers who seized Ahed, handcuffed her and led her to an army jeep.

Ahed Tamimi was forcibly taken away from her parents home by Israelis at 4 a.m. Palestinian time. She is a child activist. A child. pic.twitter.com/oHGB585mTT

IOF arrested 16-year-old Ahed Tamimi after breaking into her house last night. When her mother Nariman went to see her daughter in the detention center of “Benjamin” north of Ramallah, she got arrested too. pic.twitter.com/gdj1ncryBA

The arrest came after a video posted by Israeli police showed a daring Ahed defying Israeli soldiers last Friday. She and her cousin appeared kicking and pushing two armed soldiers from her family’s front yard.

An Israeli army spokesperson told Al Jazeera that Ahed was arrested because of “assaulting a soldier and an IDF officer,”  after the video went viral.

Ahed’s father, Bassem, shared a post on Facebook explaining that the 16-year-old  attacked the two soldiers because they shot her 14-year-old cousin with a rubber coated metal bullet during a demonstration against the ongoing military occupation. The boy is in a medically-induced coma.

“Nariman [Ahed’s mother] was hysterically crying and attempted to hug Ahed, but she was thrown to the ground by the soldiers,” Bassam traced the circumstances of his daughter’s arrest.

After announcing, without explanation, that Ahed will be arrested,  the Israeli forces seized the family’s electronics. Ahed’s 14-year- old brother refused to give his phone, but “six soldiers pushed him down and violently took it from him,” Bassem told Al Jazeera.

“I can’t imagine how anyone can do this,” Bassem said. “At the end of the day I am a father. It is not easy to see soldiers raiding your home in the middle of the night to take away your daughter.”

The Palestinians Who Fight and Suffer

On Tuesday afternoon, Ahed’s mother, Nariman, was also arrested when she went to visit her daughter at an Israeli police station to be present during her daughter’s interrogation.

Israeli Minister of Education, Naftali Bennet, Ahed Tamimi 16-year-old girl, “Her place is in prison for life”
Yet, the same Bennett did NOT want Elor Azaria – the Israeli soldier who shot & executed a wounded Palestinian in the head – to serve “a single day” in jail. pic.twitter.com/mIVLXfiNSO

According to the Association for Civil Rights in Israel, an Israeli non governmental organization, “a parent has the right to accompany their child during an interrogation in the occupied Palestinian territory,” reported the same outlet.

“They want the Palestinians to suffer. I’m so angry. But I am too powerless to do anything. This is [the reality of] occupation,” Bassem said.

International Solidarity Movement, Palsolidarity reported that Bassem has also been arrested by Israeli occupation forces when he went to the court where his daughter and wife are currently held.

Bassem has been arrested several times by Israeli forces. Amnesty International has named him a “prisoner of conscience” in 2012.

The Tamimi family started documenting the terrors of Israeli occupation  since 2009.

A skinnier, younger Ahed first attracted global attention in a viral video in 2012, when she was featured  shaking her fist at an Israeli soldier, demanding to know why her brother was detained. Since then, she appeared several times on camera, bravely defying Israeli occupation.