Rabat - Since Sunday, December 24, thousands of people flocked to the streets of Jerada, (Eastern Morocco), after the death of two brothers during the flooding of an underground mining well, according to local activists and media. 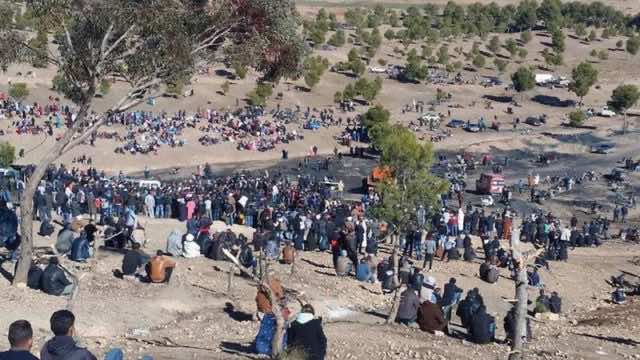 By
Chaima Lahsini
-
Chaima Lahsini is freelance journalist and activist with the Al-Fam collective in Rabat.
Dec 25, 2017
Spread the love

Rabat – Since Sunday, December 24, thousands of people flocked to the streets of Jerada, (Eastern Morocco), after the death of two brothers during the flooding of an underground mining well, according to local activists and media.

Houcine and Jedouane Dioui, aged 23 and 30 respectively, drowned Friday, December 23, while mining the underground tunnels of a disused coal mine in the Eastern city of Jerada.

It took six other miners more than 24 hours to extract the bodies, and the family of the deceased is opposing the burial of the two victims to denounce “the injustice” and “marginalization” of their city, Ahmed Belatay, member of the Moroccan Association for Human Rights (AMDH).

Belatay told Morocco World News that local authorities did intervene, but in small numbers and without adequate material or training.

The city of Jerada, located about sixty kilometers from Oujda, capital of the Oriental region, was known by its large coal mines, where more than 9,000 miners were still working at the time of the announcement of its closure in the late 1998.

Without another mean to subvent to their means, locals still worked at the mines illegally, with the knowledge of the local authorities.

“Twenty thousands of citizens residing in the old mining town flocked the city’s streets Sunday night to denounce the social and economical neglect suffered by the region”, according to  Ahmed Belatay, member of the Moroccan Association for Human Rights.

The protesters have picked up slogans of the protest movement of Hirak, which has stirred throughout the past year the neighboring region of Rif (north), according to videos broadcast on social networks.

While local authorities didn’t intervene to disperse the protests, military reinforcements were on the ground, explained Belatay.

For the time being, the protests are “spontaneous” and no political unions or parties have been involved yet, added Belatay. “The inhabitants are only demanding development projects.”

About ten days ago, Jerada witnessed several demonstrations conducted to protest against water and electricity bills, but it seems that the Dioui’s brothers death that could lead to a rising Hirak in the region.