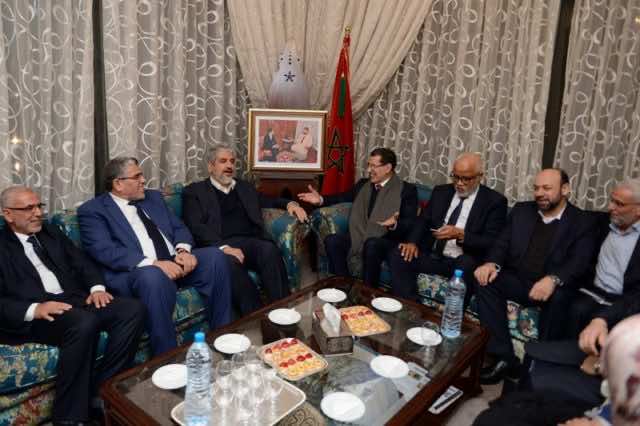 Meshaal, who arrived in Morocco on Tuesday, December 26 at the request of the PJD, was warmly received by Head of Government Saad Eddine El Othmani and other Moroccan political leaders. The visit is aimed at discussing the Palestinian cause as well as the Jerusalem issue, which has been making the headlines after US President Donald Trump recognized it as the capital city of Israel.

The PJD took the opportunity to conduct an exclusive interview on Wednesday, December 27 with the former leader of the Hamas movement, which has been fighting the Israeli occupation for years.

For Mechaal, Trump’s decision was not only shocking for Arab and Muslim countries, but also for the international community. He explained his point by saying that this decision was “different from the determinants of US policy on the Palestinian-Israeli conflict.”

He added that the US move resulted from different factors. “Trump came to the White House from outside the context of the American regime, and he wanted to be distinct from precedent leaders.” During the presidential campaign, Trump made many promises, including recognizing Jerusalem as Israel’s capital.

Meshaal said that Trump “wanted to show [his supporters] that he can keep his word” unlike former leaders who could not fulfill their commitments.” However, for Meshaal, Trump was not successful in doing so either.

The former Palestinian leader describes Trump as “self-contradictory,” saying he could not withdraw from the Obama-era nuclear agreement with Iran after promising as such during his election campaign. “He could not do it because he was pressured by his advisers as well as by the European powers.”

When he failed to fulfill his commitment regarding the nuclear agreement, “[Trump] chosen a weakness, which came at our expense in order to show off his power and to prove that he can fulfill his vows.”

Meshaal added that Trump wanted to please Israel and Zionist leaders in the expense of Arabs and Palestinians in order to escape the  “Robert Muller’s Russia Trump investigation.”

In May, special counsel Robert Mueller was appointed to investigate the possible Russian interference in the US 2016 elections.

Mechaal said that “Trump thought he could escape this issue by pleasing Israel at our expense, and achieve his own interests.” However, Trump’s move was not for the benefit of the US, but rather made the country “lose its prestige,” recalling world leaders’ reactions after Jerusalem recognition.

This decision made “the US lose its mediation role, and the proof is Mahmoud Abbas’s ( president of Palestine) recent statement, declaring that he would no longer accept any peace plans proposed by the US,” he added.

Meshaal pointed out that the US took advantage of the “ongoing crisis in the Arab world to make this step.” After being asked about his opinion regarding the US’ veto usage in favor of Israel, Meshaal said that this can be explained by simply saying that the US is “biased to Israel.”

Meshaal noted that for the US, “Israel is not a part of the external policy but a part of its internal policy. Everybody knows that,” adding that “there are many zionist lobbies, which have huge influence on the American congress and the White House.”

The US has always been a big supporter of Israel. “It is using it to achieve its interests and goals. This is why we are not considering it as a fair player” in negotiations. “The time has come for some people, including [Palestinian president] and other Arab leaders to know the truth, it is somehow a delayed conclusion.”

The politician added that it is impossible to give the mediation role to a country, which is biased and against Muslims and Arabs.

This is the second time that the Palestinian politician paid a visit to Morocco. In 2016 , Meshaal was invited to attend the 7th Extraordinary Congress of the PJD, which extended the term of former Secretary General of the Party to another year.

During his second visit to the North African country Meshaal held on Tuesday talks with several leaders of other politicians parties, including Ilyas El Omari, Authenticity and Modernity Party leader.

He also lauded King Mohammed VI’s stance on the Jerusalem issue, noting that “Morocco, through, King Mohammed VI, chairman of the Al-Quds committee, plays a decisive role in the conflict.”

Meshaal also stressed the importance of political, diplomatic and public actions in order to “use all the economic cards, international relations, as well as mobilize people throughout the world to stand with the Palestinian people in order to support their resistance in Jerusalem and put pressure on the US administration.”