Rabat - French-Congolese rapper Gandhi Djuna, commonly known as Maitre Gims, will hold a free concert on December 29 in Jemaa El-Fna square in Marrakech, as part of the first edition of “Stars in the Place,” announces a press release. 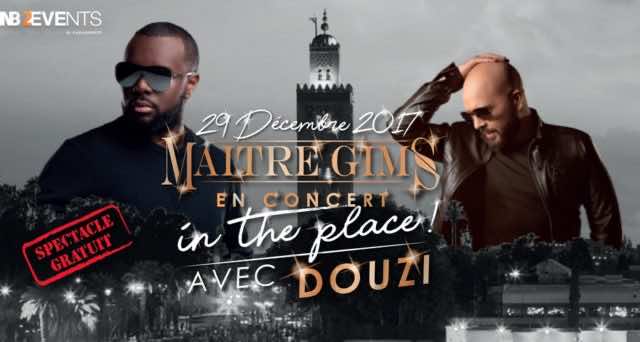 Rabat – French-Congolese rapper Gandhi Djuna, commonly known as Maitre Gims, will hold a free concert on December 29 in Jemaa El-Fna square in Marrakech, as part of the first edition of “Stars in the Place,” announces a press release.

“In a large platform, designed by performing professionals, Maître Gims will perform his best songs by using his unique style: a mixture of hip-hop culture and other varieties that transport the audience to the magical world of music,” said the statement.

An habitué of Morocco, where he has a large fan base, the famous singer will perform on stage along with the singer Douzi, Cravata group, Sy Mehdi and “plenty of other surprises.”

“The evening will be completely free and accessible to the audience’s maximum attendees,” the statement adds. The tickets offered are available on the website www.ticket.ma.

The singer also talked about his special relationship with King Mohammed VI, saying that the King has become his “friend.”

“The King of Morocco has become a friend, someone who is close to me, someone who helped me a lot and who has presented Morocco to me in a different angle,” he said.

The French rapper has also been pictured several times wearing Moroccan clothes to show his admiration for the Moroccan culture.