Rabat - Colin Stewart, UN’s Special Representative for Western Sahara and the newly elected Head of the United Nations Mission for the Referendum in Western Sahara (MINURSO) landed in Morocco’s southern city of Laayoun on December 29, to conduct an evaluation of the mission’s performance in the region. 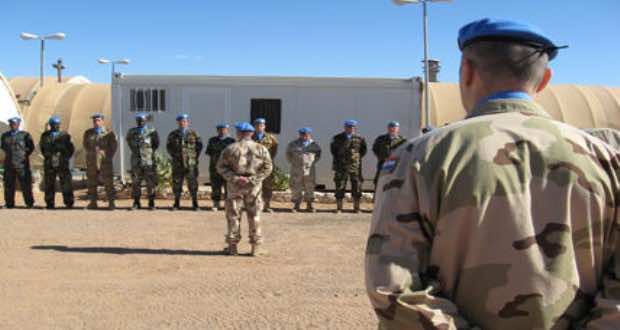 Rabat – Colin Stewart, UN’s Special Representative for Western Sahara and the newly elected Head of the United Nations Mission for the Referendum in Western Sahara (MINURSO) landed in Morocco’s southern city of Laayoun on December 29, to conduct an evaluation of the mission’s performance in the region.

The news was reported by Moroccan daily Akhbar Al Yaoum in its December 29’s issue. According to an unidentified source of the newspaper, during this visit, the MINURSO chief will investigate the situation in the Guerguerat region and its nearby areas,  where the Polisario Front have been carrying armed in the past weeks.

The Special Representative of the UN’s Secretary-General will also assess the military performance to monitor the situation in Western Sahara, in accordance with the ceasefire agreement that ended the war between Morocco and the Algerian-backed separatist group. This is the first official visit of Stewart since his appointment to the position on December 1.

Stewart is expected to pay a visit to Morocco’s capital city, Rabat during his stay in the country.

On December 27, Moroccan media reported that Polisario’s military forces have been conducting military maneuvers in Guerguerat. The separatist group’s provocative move was conducted in the presence of members of the Algerian military forces, stating that this armed operation was a “military parade” for its forces to exercise live ammunition.

Algeria, an official supporter of the Polisario Front, has handed heavy machinery and equipment to the separatist group, in fulfillment what they described as “the absolute support provided by Algeria.”

Polisario’s actions are aiming at studying the possible plans to control and install its militias in the region of Guerguerat. The separatist group is planning to present on January 2 its upcoming projects to the leader of the so-called  Sahrawi Arab Democratic Republic (SADR), Ibrahim Ghali.

The newspaper added that the separatist group is plotting a military attack in Guerguerat against Morocco’s military forces. Polisario’s future move was confirmed by SADR’s Minister of defense, who said that “the front will not maintain its refugee status quo forever.”

Earlier this month, the separatist group addressed a message to Antonio Guterres UN Secretary-General, threatening to re-enter Guerguerat as it “would no longer accept the current situation of the front.” The letter, addressed by Ghali says that “the situation has not changed” in the region, claiming that the UN Security Council resolution on the regulation of the status of the Guerguerat buffer strip in accordance with the ceasefire agreement “has not yet been implemented.”

Polisario has also accused Morocco of violating the resolution, claiming that “the Moroccan presence in the buffer zone constitutes a direct violation of the resolution.”

Morocco, in a matter of fact, was the first to withdraw from the region in February 2017 at the request of the UN’s Secretary-General, who called on both parties to leave the region in order to decrease the tension between the two sides.

After the refusal of Polisario to withdraw its armed forces from the region, a draft resolution on Western Sahara was submitted “in blue”- meaning ready for adoption- to the secretariat of the UN Security Council on Thursday, April 27.

The draft resolution put high pressure on the separatist group, urging it to leave the region or face a compulsory withdrawal. The document then gave Polisario 30 days to abide by the provisions of the resolution. Two days later, Polisario started withdrawing its forces from the region on April 30.