Morocco World News
Home Culture Assistant Rips Off Comedian Jamel Debbouze To the Tune of Half A...

Rabat - Moroccan-French comedian Jamel Debbouze fell prey to embezzlement by his assistant, who stole nearly half a million euros by forging his signature.

Rabat – Moroccan-French comedian Jamel Debbouze fell prey to embezzlement by his assistant, who stole nearly half a million euros by forging his signature.

How to Deceive a Jokester: Play Nationality Card

The story dates back  to 1999. By then, Debbouze had already achieved national fame in France. In a country far away from home, Jamal meets Nadia, a 26 year old self-taught, manager of fast food chain McDonald’s, recounts French Media Business BFM.

Both of Moroccan descent, their common origin bonds them. Conversation kicks off and Nadia tells him that she has worked for the tax department, and offers to look into the accounts of his company, Kissman Productions.

Seeing that Debouze is buying her lies, Nadia makes a blind bet and plays a bold card: she tells him that his agent and partner, Jacques Massadian, has “stolen money from him.”

She wins. Soon after, Jamel recruited her as a financial assistant, and gradually entrusted her with more and more tasks.

How to Deceive a Jokester Step 2: Be the Jokester

Nadia complies, and opens the account in the absence of Debbouze.

She imitates the comedian’s signature, and takes the opportunity to obtain a false power of attorney on the account. She also gives the bank Debbouze’s expired passport dating to 1994.

She provides the address of Jamel’s parents in Trappes, knowing that this move would allow her to pick up the letters of the bank from Debbouze’s parents, without complications.

During the following months, Nadia made 14 transfers from his account to that of her family.

In June 2000, the CIC warned Debbouze about the abnormal operations of his account. He learnt that out of EUR  80,000 he received for an advertisement with Maroc Telecom, he’s left with only EUR 3,810.

Debbouze rearranges his cards and gets prepared to play. He contacts Nadia, who assures him that she will explain everything to him, before disappearing.  He files a criminal complaint.

Two trials are held. In the first, Nadia introduces herself as a “professional golfer.” She declares an income of EUR 120,000 thanks to her new job as a manager of a DIY store in Tangier.

Nadia acknowledges the false signatures, but assures “to have done everything at the request of Debbouze.”

She claims that Debbouze was unable to  manage his financial transactions because he was on tour.

She adds that she was the comedian’s agent and negotiated his contracts for TV shows, movies and  investments, including the purchase of a house in Bordeaux for EUR 260,000 and a riad in Marrakech for EUR 750,000. “The misappropriated money was in fact my pay for serving as his agent,” she said.

Jamel denies her claims and the judges are not convinced either.

“Miss Nadia has no legal document proving that she took part in the negotiation of contracts.  Mr. Debbouze’s tours do not prevent him from writing,” the judge said.

In her defense, Nadia also provides investigators with a series of invoices and receipts, as proof of expenses she paid for Jamel. These consist of stretch marks creams, cellulite, toothpaste, towels, cleaning products, diapers, trips to New York and Marrakech.

“A pile of papers without probative value,” say the judge. “These documents are actually expenses incurred in the interest of Nadia or her family, and are far from covering the sums of money depleted from Debouzze’s account.”

On June 6, 2007, the district court sentenced Nadia to 18 months in prison,  for “forgery , counterfeiting and falsification of checks.”

She was fined to pay the misappropriated sums, plus EUR 4,000 euros for the legal costs, and another EUR 3,000 to compensate the moral damage.

Nadia appeals, however, her request backfires. The judge sees that his sentence was too lenient, and on February 26, 2010, the appeal court increases the suspended sentence to two years.

Unfortunately for Debbouze, his trickster assistant has already spent a large amount of the plundered money.  She bought a used Mercedes at EUR 18,300, and an apartment in Marrakech, a few kilometers from Debbouze’s villa. 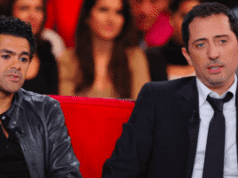 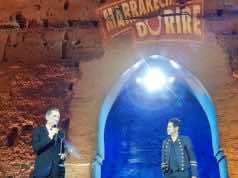 Moroccan Comedian Jamel Debbouze in his first tour in the U.S.