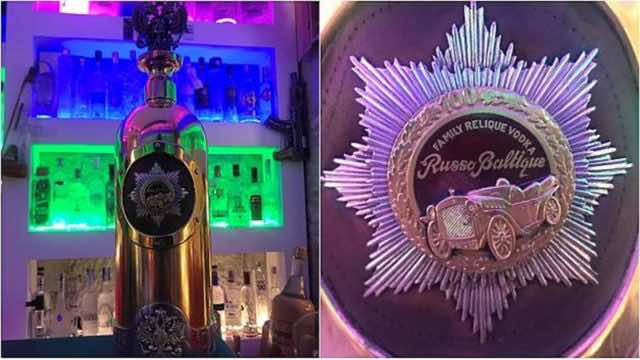 Rabat- A bottle of vodka claimed to be the most expensive in the world was reportedly found empty on a construction site, after being stolen earlier this week from a bar in the Danish capital of Copenhagen, local Police confirmed on Twitter.

The owner of the Cafe 33 bar, Brian Ingberg, told Denmark’s Ekstra Bladet that the bottle is worth USD 1.3 million and appeared on the US television series “House of Cards,” where the Russian president gifts the bottle to US President Frank Underwood.

“The expensive vodka bottle that was stolen in Vesterbro [central Copenhagen neighbourhood, ed.] in the early hours of Tuesday has been found,” the police’s tweet read.

“The bottle is now in police custody, and appears to be intact and will be examined,” said a second tweet.

Created by the Russian luxury car maker Russo-Baltique, the bottle is made of gold and silver and has a diamond-studded cap.

“I had loaned [the bottle] from the Dartz Factory in Russia, which is known for making the world’s most expensive cars and vodka. It has been part of my collection for six months,” the owner said.

“Unfortunately, it’s empty. It is one of the employees working on the construction site that has found it.”

“I feel fantastic. The vodka god saved us,” he added.

Since the bottle was found unbroken, Ingberg said that he is planning to refill it again and put it back on display.

A CCTV footage of the robbery featured what appeared to be a masked young man entering the bar and looking around the storage before taking the high-value bottle.

“They apparently had a key or copied a key, and they rolled up the shutters and unlocked the door, then gone into the bar and broken down the door to the vodka museum in the basement. They then left with only one bottle, even though there are 1,200 bottles they could have taken,” Ingberg told the media outlet TV2.