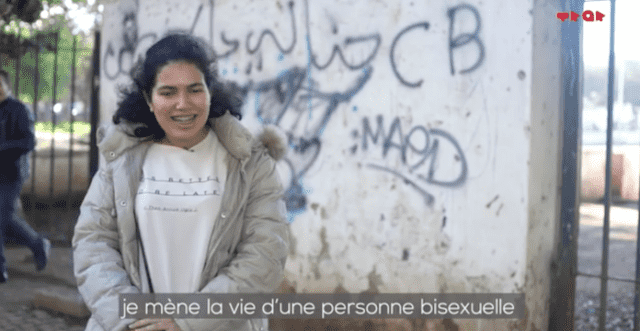 Rabat – Jawjab Studio’s innovative project “Marokkiates,” continues to break one stereotype after another, by shedding light on controversial subjects like adoption, hijab, sexual harassment and love in a series of videos. This time, the media platform has released its new video in which, Rihab, a Moroccan young woman was given the chance to speak up about her bisexuality in Morocco.

“The first time I fell in love, I loved a girl. To make myself clear, I am a bisexual person,” Rihab said.

For the young lady, it is quite difficult to describe her sexual orientation to Moroccans as it has no equivalent in Moroccan Darija.

Rihab recounts her life of bisexual in Morocco, with its disadvantages, but also its relative advantages, saying that female homosexuality is treated with more tolerance compared with the masculine one.

“Homosexuality or bisexuality for girls in Morocco is more socially acceptable than it is for boys. If people see two gay men holding hands or kissing each other on the cheek, everyone will stop. Morocco will just flip up. I know that I have a privilege, for once, for being a girl,” she said.

However, Rihab confessed that at the beginning, she hesitated to take part in this video project. But by doing so, she hopes to inspire others to accept and reconcile with their sexual identity and orientation.

“When I first contacted you [the director], I was asking myself if I was ready enough to appear before the camera and speak openly about my sexual orientation, knowing all the terrible consequences I might face in the society. But at the end, I think that soon or later, someone has to do it,” Rihab concluded.

The video published online, went viral on social media and garnered hundreds of thousands of views.

“Marokkiates,” or Moroccan women in Moroccan dialect, is a new project launched by media content platform Jawjab, created and direct by Sonia Terrab last November, who wants to answer the age-old question, who are Moroccan women?

In addition to Rihab, several women also appeared in other videos to break the traditional mold by which Moroccan women are perceived. Their raw and touching videos are shedding light on the daily life of Moroccan women from all walks of life.