Rabat - Morocco’s return to the African Union has proved to be fruitful. On Friday, Tanzanian Foreign Minister Augustine Mahiga said that Morocco is establishing itself as a key player in several strategic fields related to development, peace and security. "Morocco's contribution to the AU is of great importance," said Mahiga. 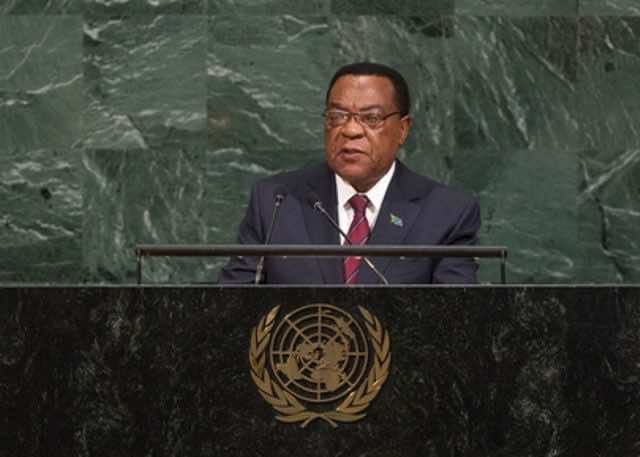 Rabat – Morocco’s return to the African Union has proved to be fruitful. On Friday, Tanzanian Foreign Minister Augustine Mahiga said that Morocco is establishing itself as a key player in several strategic fields related to development, peace and security. “Morocco’s contribution to the AU is of great importance,” said Mahiga.

Mahiga voiced his statement on the sidelines of the 32nd ordinary session of the AU’s executive council which is currently taking place at the AU headquarters in Addis Ababa, Ethiopia.

Recalling King Mohammed VI “historical” speech delivered during the 28th AU Summit in January 2017, Mahiga said the country’s return to the AU was supported by the vast majority of the members of the Pan African organization.

The Tanzanian official said that, “the royal speech was very encouraging. It is a forward-looking speech that has defined Morocco’s expectations among its African family.”

Mahiga expressed his satisfaction of Morocco’s vision regarding the issue of immigration in Africa. “The African family has placed their trust in the King by asking the sovereign to take charge of this very important issue,” he said. Mahiga described Morocco’s contribution towards the issue of immigration in the continent as, “very constructive,” since immigration is one of the issues that is the subject of critical diplomatic discussions within Africa, according to Maghreb Arab Press (MAP).

“A Moroccan seat on the Council will offer the country a better opportunity to reinforce its valuable contribution to the areas of peace and security in Africa.”

In his remarks, Mahiga lauded Morocco’s role in peacekeeping issues within Africa dating back to the creation of the Organization of African Unity. He recalled the deployment of Moroccan soldiers as peacekeepers in Congo during the 1960s. This is a “very constructive” role that Morocco plays in the UN, he said. He was confident that Morocco’s solidarity with the AU will always be appreciated. He emphasized that Morocco has always responded voluntarily and without hesitation to the calls of solidarity with its African brothers.

Bilateral Relations Between Tanzania and Morocco

Mahiga discussed Moroccan-Tanzania bilateral relations. The official said that that the historic visit paid by the King to Tanzania in 2016 had opened wide new perspectives for Moroccan-Tanzanian cooperation in new sectors with promising opportunities. The King signed 21 bilateral agreements with the Tanzanian president. The agreements were intended to encourage greater economic relations between the two countries.

For Mahiga, the visit has reaped benefits in terms of the partnership between Rabat and Dar es Salaam in many sectors, adding that the royal visits by King Mohammed VI to several West and Central African countries will deepen and consolidate Morocco’s relations with the continent’s countries, including Tanzania.