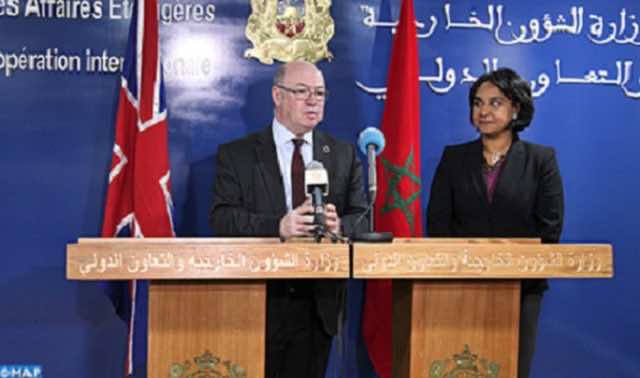 Rabat- Britain’s Minister of State for the Middle East and North Africa, Alistair Burt, expressed his country’s desire to strengthen bilateral ties with Morocco yesterday during his visit to the Kingdom.

In a press release from his meeting with Moroccan State Secretary Mounia Boucetta  at the Ministry of Foreign Affairs and International Cooperation, Alistair Burt spoke positively of the “fruitful meeting” and historical ties between Britain and Morocco, saying that “Although historical, relations between his country and Morocco are oriented towards the future,” especially in the current Brexit climate.

Mr. Burt said that Britain is well-disposed to Morocco for which it has “great esteem.” This visit, he also said, is part of Britain’s interest in maintaining and strengthening relations with its friend states, of which Morocco.

“In our exchanges, we shared our visions and ambitions regarding tourism, commerce, agriculture, sport, and culture,” Burt said, underlining that the two countries are jointly prepared to face security threats, which he explained require “active cooperation.”

As far as the Western Sahara question is concerned, Mr. Burt praised Morocco’s “genuine and serious efforts” in finding a sustainable and feasible political solution; he also renewed his support for the UN mission charged with finding a solution to “the problem.”

During Burt’s two-day working visit, he met with several of his Moroccan counterparts, such as Aziz Akhannouch, the Minister of Agriculture, Fisheries, and Rural Development, and Mohamed Sajid, Minister of Tourism, Air-Transport, Handcrafts, and the Social Economy, in the spirit of extending his country’s willingness to consolidate bilateral ties with Morocco,