Rabat - On January 27, 2018, the 24th monthly dinner bringing together the American Jewish and Moroccan professionals of various backgrounds was held together in the beautiful home of one of the American Sephardi Federation's board members, Jamil Ezra. 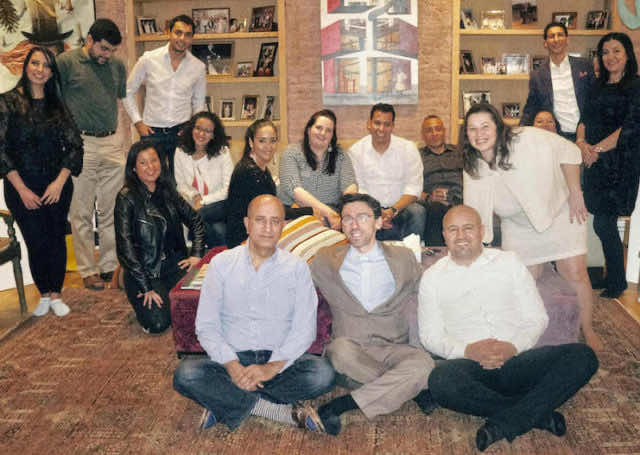 By
Irina Tsukerman
-
Irina Tsukerman is a New York based attorney, whose focus is on assisting human rights defenders, liberal democratic dissidents, and persecuted minorities, and who frequently writes about security issues, human rights, international affairs, and geopolitics.
Feb 1, 2018

Rabat – On January 27, 2018, the 24th monthly dinner bringing together the American Jewish and Moroccan professionals of various backgrounds was held together in the beautiful home of one of the American Sephardi Federation’s board members, Jamil Ezra.

Over delicious food, wonderful music, and while gazing at great art piece, we mingled freely and comfortably and discussed an assortment of topics, ranging assorted cultural pursuit, international and domestic US politics, and relationship building with other countries. At the center of it all, however, was the central question: where do we go from here?

When my Moroccan co-organizer Simo Elassaoui first approached me about the idea about starting a social club for Jewish and Moroccan communities to come together once a month to network and build relationships over dinner, I jumped on it, and we started almost immediately. We have not missed a single months, though some dinners were significantly more populous than others.

One of the highlights of this project was last year’s megadinner with King Mohammed VI’s Counselor, Andre Azoulay, who is Jewish. Also present at the event were the Jewish-Algerian singer Enrico Macias, who now resides in France, and Kuwaiti singer, actress, and  human rights activist Ema Shah, as well as Moroccan-born singer Neta Elkayam.

The three performers united for a magnificent concert at the American Sephardi Federation’s Morocco-themed opening night of the ASF annual Sephardic Film Festival, celebrating its 20th anniversary. It was a spectacular success. That dinner was quite a surprise, because we were expecting approximately 40 people, but ended up with 68. We have dined in a variety of restaurants, in homes of some of the members, and in December 17, even celebrated the New Year early with our dinner at a Moroccan community event, complete with delicious Moroccan buffet, live music and singing, and very vivacious dancing.

Acquaintances and networking gave rise to real friendships. And the monthly meetings became a lot more than just a way to explore new cultures or to find an outlet for off-the-record honest conversations that may not have been possible in more mixed settings.

Eventually, we began to see that not only we were looking forward to seeing each other at these regular gatherings, but the sense of community was building up and becoming quite real – and perhaps the time came to do something more with what we had, to take it to the next level. Recently, we finally became a New York State not-for-profit organization, focused on social and educational activity.

Now having a platform for organizing events on a bigger scale and under a name – Moroccan Americans in New York (or M.A.N.Y.), as well as a social media mechanism for promotion – a populous Facebook group under the same name, we could look towards doing more diverse and engaged social activities that would have wider reach towards both communities, as well as anyone else who cares to join. We had our first board meeting, and we are excited to proceed, working together to build something real, exciting, and lasting. It’s time to think past legacy and towards heritage.

However, it has not always been smooth sailing, and challenges, likewise, lie ahead. Aside from the logistical issues of running an organization, for me personally bringing it new members of the Jewish community to these events has been a challenge.  There is a fair number of regular “clients,” who have attended multiple events, and for their friendship and support I am truly grateful.

But New York is a busy place, the Jewish community is preoccupied with assorted social events, existing Jewish organizations, family lives, as well as, for the singles, the pressure to spend every free moment in the dating world. How do you make bridge building and intercultural exchanges a top priority for the New Yorkers who already live, work, and mingle in one of the most diverse cities n the planet?

Initially, dealing with this issue was frustrating, and at times, I frankly was not sure whether our fledgling effort was going to last or whether it was even worth our while to continue trying in this format. You can only bring the horse to the water, but you cannot make it drink. But over time, we became invested in this monthly meeting, and I realized that I was doing it not because I owed it to anybody to come up with some imaginary perfect numbers, but because I genuinely enjoyed both the process and the outcome.

We have created something that managed to survive two years – and that’s amidst all the distractions and challenges of New York, with participants growing, rather than losing interests, and potential new opportunities were opening up.

With future diversity of events, there will be greater publicity, and perhaps more public interest. But the exclusivity of being one of the “original” founding members is not to be discounted. Recruitment, though a challenge, has never been an obstacle to an honest exchange of ideas that have caused me to think much more deeply about future possibilities of engagement for the communities, as well as, the United States and Morocco as a whole – and I was inspired, after a long break, to return to writing with a new sense of perspective, and more solid grasp of the issues. Far greater difficulty lies in having the “conversation” with the recalcitrant members of my community, which find my activity in this organization confusing, inexplicable, and of dubious value.

Many people are simply suspicious of other people who are not like them; they are closed off to the extend that they are not even interested in having their assumptions shattered. The extent of distrust is deep; there is sometimes a sense of silent judgment.

The defensive mindset present in a good portion of the community is in tension with the social requirement of appearing open-minded and multiculturalist. This results in New Yorkers sometimes surrounding with random people of very superficial value to their lives, for the sake of appearing the “right” kinds of friendship – while actually having very little in common, and even less interest in creating real bonds.

The mistrust is not always open and straightforward. Sometimes it is exhibited in seeming excitement and interest in joining – yet the prospective participant never shows up, nor has any good explanation for never having the time to do so. Certainly they are missing out on a great time, and on having their internal questions answered, perhaps, but underneath it all lies the fear: what if I am right about all these people, and they will hate me? And what’s worse, what if I am completely wrong and have been wrong all my life? At the end of the day, there is the concern about disrupting one’s favorite paradigms, leaving one’s comfort zone, or the bubble.

In New York, it is not the traditional kind of racism or any other kind of well known “isms” that is the biggest problem when bringing together different cultures. It is the tokenism that allows New Yorkers to feel so proud of themselves for how open-minded and tolerant they are, not in the way that is proud of their tolerance and defensive of others, but in a way that is proud of their pride and how good everyone else should think they are. Of course, that’s not to generalize – there are millions of New Yorkers of every imaginable background, and some communities are simply more insular than others, and over time and over generations that changes and everyone ends up hanging out with everyone else. Still, the bubble mentality is real.

The favorite kind of person people who really like to stay in the bubble but want to pretend that they have left it for good is some group of people that they can consider a victim and adopt as a pet project. And here, I am going to be blunt – Moroccans, overall, simply do not fit anyone’s vision of anything of that sort.

Individually, they are all very different people, of course, with different personalities, interests, ethics, and so forth – but the one thing they have in common, is that it’s not a passive group and not a passive culture. These are people who are highly professional, greatly engaged, life-loving and affirming, opinionated and robust. This is not a culture of whiners and complainers. Yellers, laughers, dancers, and ravers – maybe. Ok, more than maybe. Nor are these people who lack self-criticism or who do not engage in discussions of their culture, countries they live in, or every matter on the planet. Wherever there are Moroccans, there is vibrant debate, discussion, or even gossip of some sort going on. There is no passivity whatsoever.

What attracts me so much to the very different people with a very strong sense of values, and a very expressive way of living is a big turn off to the bubble dwellers, who prefer to interact with easily predictable, passive people, who will demand endless attention for nothing more than their misfortunes in life and in exchange make their benefactors feel like heroes. That the bubble mentality has apparently infected the atmosphere in New York is unfortunate, but not irreversible. If you are ever in New  York and feel the firsts signs of it coming on – we can save you from that. The fact that we have lasted as long as we did and are not going away anywhere is a sign that what we have to offer, the world worlds and needs.

Firm sense of values and identity coupled with the open mind towards others. Commitment to growth and to a creative drive. A sense of family and belonging; a home we create not only when we meet for dinners, but whenever any of us are together with other participants. Inquisitive mindset, zest for life, taste for good food, good music, and good fun, and a deep-seated, full-throated, unapologetic joy.

We come together, not only every month now, but at various other social occasions, simply because we want to be there and we want to share these special experiences and good times with our friends. And that is what is ultimately all about… even if many people do not yet understand it, that sometimes it’s just about being with friends. Whoever they are, wherever they – as long as they bring warmth, openness, and good conversation to the table, they are welcome. So pull up a chair, get your plate ready for a heaping of delicious food, and come join us next month.