Rabat - The Atlas Lions have had an impressive streak during the 2018 African Nations Championship. The team will play Nigeria on Sunday evening for the CHAN championship. 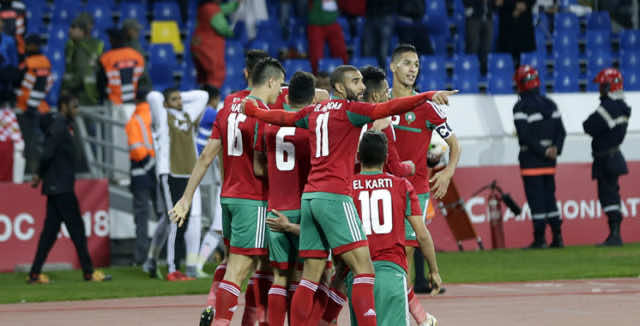 Rabat – The Atlas Lions have had an impressive streak during the 2018 African Nations Championship. The team will play Nigeria on Sunday evening for the CHAN championship.

In five matches during the tournament, Morocco has not allowed opponents to score more than a single goal in any match as the team went 4-0-1. The past few months have been an exciting time for Moroccan soccer, from qualifying for the 2018 World Cup to Wydad Casablanca winning the 2017 Africa Champions League title. Excitement that builds momentum for the nation as it moves forward on its bid to host the 2026 World Cup.

Another big game takes place this Sunday evening, about 11:30 p.m. Rabat time. The National Football League (NFL) championship game will take place in Minneapolis, Minnesota. The Philadelphia Eagles will play the New England Patriots in the 52nd edition of the Super Bowl. The game has become America’s premier sports championship event, in part, because it is a single-game championship.

NHL ice hockey, Major League Baseball, and NBA basketball all use a best-of-seven championship series format. The Super Bowl is one 60-minute game with a lot of hype. The NFL usually selects warm climate cities to host the big game but this year’s match takes place in a northern city known for very cold winters, inside an enclosed $1 billion stadium.

FIFA organizes the quadrennial World Cup tournament. Soccer (football) is the world’s most popular team sport and the sport with the most fans around the world. The World Cup Finals match is perennially one of the most watched global TV events. The tournament includes 32 participating teams (48 teams for the 2026 World Cup).

With such widespread geographic popularity and with so many teams represented, it’s logical that many World Cup matches attract large TV audiences. American football — all 32 league teams are located inside the continental US — has a growing level of popularity outside the US, particularly in Great Britain, Germany and Canada. But it remains a uniquely American sport.

How do the two big games compare? The World Cup final match and the NFL Super Bowl?

The FIFA finals match has a slight edge over the Super Bowl in attendance. The attendance for the 2014 finals match between Germany and Argentina at Rio’s Maracanã Stadium was 74,700. The 2017 Super Bowl between the New England Patriots and the Atlanta Falcons attracted 70,800 fans to NRG Stadium in Houston. US Bank Stadium in Minneapolis will have about 66,000 spectators for the Super Bowl on Sunday evening.

Watching the big game on TV is popular everywhere. From Rabat to Sydney. Everywhere. And World Cup soccer is king of the ratings. After the conclusion of the 2014 World Cup, FIFA reported that roughly one billion people had watched at least one minute of the final match. Viewership included home television audiences and people watching in public spaces and online (calculated estimations which are part science, part art).

The 2017 Super Bowl, a dramatic game that saw the New England Patriots make the largest comeback in Super Bowl history, had an average audience of 111.3 million viewers for Fox Sports. Another 1.7 million people watched the game online in the US, and 650,000 additional viewers watched Spanish-language network coverage of the game. In recent years, about 40 million people outside the US watch the Super Bowl.

Another soccer finals match that draws millions more TV viewers than the NFL Super Bowl is Europe’s UEFA Champions League final match. In 2017, the game between Real Madrid and Juventis was seen by an estimated 165 million people in Europe and by nearly the same amount outside Europe. And the immense popularity of cricket should be noted. The 2015 early-round match between Pakistan and India at the Cricket World Cup in Australia attracted an estimated one billion TV viewers, including almost 290 million in India alone.

The Super Bowl is a one-day American cultural spectacle that blends sport, entertainment, patriotism, and consumerism. A company wishing to promote a product during the game will pay about $5 million for a 30-second commercial. Millions watch the game solely to view the commercials. The ads are often funny, with cameo appearances by Hollywood stars, or they are quirky with an everyman or everywoman point of view. The game includes a half-time musical performance by a big music star.

After four 15-minute quarters, one team will be victorious (only once has a Super Bowl game needed overtime to decide the winner). Just two short weeks after the Super Bowl, baseball players head to Florida and Arizona to prepare for their long season that begins in April. The Atlas Lions will prepare for the 2018 World Cup in Russia that begins June 14. More dreams of winning it all