Rabat - Moroccan journalists can be pardoned for exaggerating the technical prowess of the local Atlas Lions that thrashed Nigeria on Sunday. Moroccan fans- who else but them-can also be excused for their fanatical attachment to a team that has given the country a major trophy after decades of drought, of humiliating performances on the continental sphere. 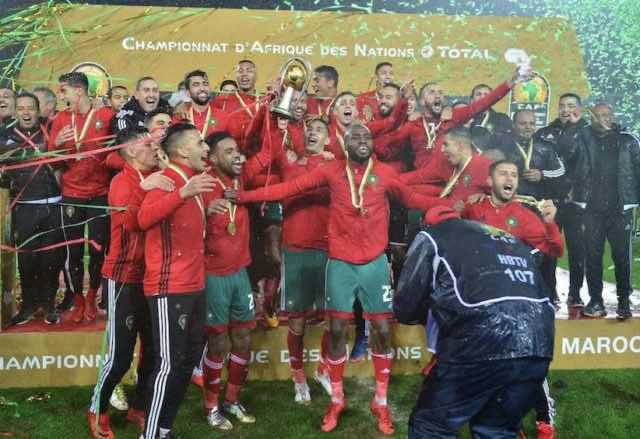 Rabat – Moroccan journalists can be pardoned for exaggerating the technical prowess of the local Atlas Lions that thrashed Nigeria on Sunday. Moroccan fans- who else but them-can also be excused for their fanatical attachment to a team that has given the country a major trophy after decades of drought, of humiliating performances on the continental sphere.

Love can be tyrannical; demanding tenacity and commitment, it can transform admiration into an abyss of overemphasized homage. This time, however, the fuss is understandable, and the exaggeration has a firm ground of legitimacy: After all, why not celebrate, -with all the irrationality and exaggerated chants that come with that–something that you’d been coveting since, that’d been eluding for years?

The truth is, the Moroccan media were not alone to rhapsodize about the splendor of an almost spotless tournament. The international press, too, having paid attention to some of the major facets of CHAN 2018, was there to help its Moroccan peers pay tribute to what is perhaps the best CHAN—so far, anyway.

“Morocco closed CHAN as it had opened it: with a beautiful festival of offensive football,” said RFI. Yes, RFI deftly captured the momentum of the moment. The analogy between the opening and closing games of the tournament was unmistakable: 4-0 Against Mauritania in the opening match on January 13; add that to the unforgettable smash the Lions gave Nigeria’s (Super?) Eagles on Sunday—that makes 8 goals in two matches. Impressive!

But no, ‘impressive doesn’t sound quite right to The Independent. They saw something else in the game against Nigeria, in the tournament as a whole, in Morocco’s as the host country. Morocco beat Nigeria in CHAN—the major international tournament you’ve probably never heard of, read the title of The Independent’s article on the final. Where some of us saw a simple game—it’s sports, you know—The Independent saw a battle, a scramble for something grander, “a pathway to the top”.

Morocco, which “demolished” Nigeria, says The Independent, played “a brave, precise, and technical football.” The report is even more ecstatic report what CHAN means in this era of elitist and post-modern football: “At a time when international football is increasingly removed from fans and players at home, and when elite football feels like a different sport, rather than a pinnacle, CHAN pulls in the other direction […]”

But hey, there is always an aloof boy in the party, the stylish and exuberantly dreamy party-boy. He sees what others don’t. His dance moves, beguiling as they may be, are inimitable. That, in this festival of paeans to the local Atlas Lions, was the French outlet So Foot. Morocco’s victory in the CHAN, as So Foot sees it, is the ultimate display of the enormous, and yet unacknowledged talents who have not been fortunate enough to make it to European leagues. And so, now that Morocco has proven that locals are just as talented, the next stage is to “go win that World Cup in Russia this summer.” Wow!

To So Foot’s footballistic dreaminess, Le Point, in a typical French move, adds some literary texture to the tournament: CHAN 2018 was, they said, a fairy tale perfected on its last night when the sleeping beauty (Moroccan supporters) rose to an uproar beyond believability to “crazily celebrate” and romantically surrender to the ninth kiss that her handsome prince (EL Ayoub Kaabi) had just delivered.

In comes Jeune Afrique, arguably Francophone Africa’s most circulated and respected weekly. “Morocco has proven that it knows how to be welcoming; that it can host”, wrote the weekly in a particularly lengthy reportage on the tournament. As a “Panafrican” weekly, Jeune Afrique’s assessment of Morocco’s successful CHAN is clear: after turning a rather minor continental tournament into a massive success, who can now doubt the kingdom’s organizational potentials? Who can seriously say that they can’t host something grander eight years from now?

Of course, all of these celebrations, in their own ways, tend to be unnecessarily magnifying.

Read Also: ‘2026 World Cup Bid is an Opportunity for Morocco to Feature its Strengths’

But for Moroccan fans, there is something else to Sunday’s victory: As Moroccans watched their local squad hammer Nigeria—one of the continent’s foremost football nations—there was, beneath the exuberant mood that only victory reveals, a sense of gratitude: that decades of patience had finally borne fruit; that a lost glory was being recovered; that Moroccan football, 14 years after the Hadji (Youssouf and Moustapha) and Chammakh-led generation failed against Santos’ Tunisia, winning a major trophy, even if it is not CAN, is a morale boost for a nation so proud of, and so invested in its national sport.

After Abidjan late last year and Casablanca on Sunday, not to mention that Wydad, a Moroccan club, is the defending champion of Africa’s Champions Leagues, it seems fair to say that Moroccan football is experiencing rebirth, a renaissance. So yes, The International Press are right: CHAN 2018 went beyond what CHAN traditionally meant. And so, the fuss, the euphoria, the irrationalities, the eccentricities, the tension, the ecstasy—it is all well deserved.

As Hervé Renard prepares his boys for June 2018, Moroccans will have to wait, hold their breath, and see if the Atlas Lions can keep the renaissance alive.