The squad’s key winger, Hamid Ahaddad netted five goals for his team in the preliminary round first leg rout, to become the top scorer in the history of the tournament.

Tanzanian Simon Msuva scored a hat-trick during the game, while the Mauritanian Bakery N’Diaye has also scored a goal for Difaa Hassani El Jadidi. Morocco’s  Bilal El Magri has managed also to leave his mark during the game through scoring a solo.

The tournament, which is taking place from February 10 to November 11, is gathering together 54 teams from 47 associations. 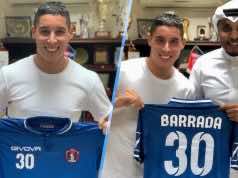