Rabat - Lieutenant General Carlos Humberto Loitey, Military Adviser for United Nations Peacekeeping Operations, is currently on a working visit in  Morocco where the Minister Delegate to the Head of Government in charge of national defense administration, Abdeltif Loudyi, received him following royal instructions. 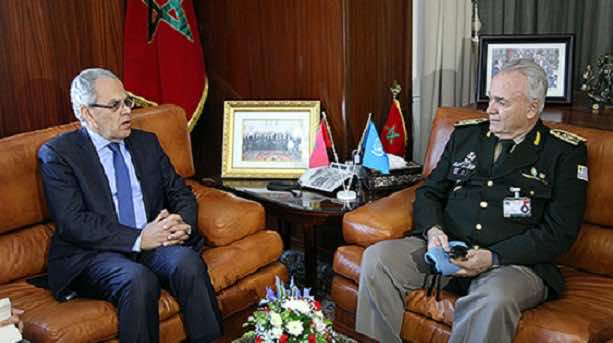 Rabat – Lieutenant General Carlos Humberto Loitey, Military Adviser for United Nations Peacekeeping Operations, is currently on a working visit in  Morocco where the Minister Delegate to the Head of Government in charge of national defense administration, Abdeltif Loudyi, received him following royal instructions.

According to the national defense administration, the two officials discussed Morocco’s contribution to the United Nations peacekeeping operations, as well as ways to improve the conditions in which these operations take place, especially given the complex environment of current missions.

Loudyi highlighted the kingdom’s continuous efforts and its contributions to the peacekeeping operations, and praised the initiatives launched by UN Secretary-General Antonio Guterres regarding the reform of the UN architecture for peacekeeping and security.

General Loitey also extended UN’s condolences to the kingdom following the death of Moroccan peacekeepers in the Central African Republic. In fact, Morocco has deployed almost 70,000 peacekeeping soldiers over the last 60 years.

A statistic issued by the UN in 2016, stated that 2,314 Moroccan soldiers participated in peacekeeping missions in war-torn countries, which earned the country a thirteenth place standing in the classification of countries that contribute the most to peacekeeping operations in Africa.