Rabat - “Sahara: What does Algeria want?” asked, bewildered and confused by Algeria’s “structural hostility towards Morocco”, a reporter at Le 360. The sentiments of confusion and exasperation expressed in said report are, considering the latest updates in the Western Sahara question, evident in Algeria’s clear position, which seems to be oriented towards undermining any prospects of a viable political solution.

Rabat – “Sahara: What does Algeria want?” asked, bewildered and confused by Algeria’s “structural hostility towards Morocco”, a reporter at Le 360. The sentiments of confusion and exasperation expressed in said report are, considering the latest updates in the Western Sahara question, evident in Algeria’s clear position, which seems to be oriented towards undermining any prospects of a viable political solution.

Algeria, contrary to its official title at the negotiation table, is anything but an “observer”.

On Thursday this week, as part of the prerogatives delegated to him by the UN Secretary-General, Horst Kohler, the UN’s Secretary General’s personal envoy for the Western Sahara question, met, in Berlin, with AbdelKader Messahel, Algeria’s foreign affairs minister.

Although the UN speaks in its guidelines of a peaceful and viable political solution at the convenience of both parties involved, Algérie Presse Service, a pro-government Algerian francophone news outlet, said: “During his meeting with the UN Secretary General’s personal envoy, Mr. Messahel stressed that the Western Sahara Question ‘is a matter of decolonization whose resolution should foreground the inalienable right of the people of Western Sahara to exercise their self-determination.’”

This self-congratulatory and illusory message, given that the same outlet, on January 27, called Western Sahara “the last African colony” and Morocco “a colonial occupier”, should come as no surprise: Algeria is by no means an observer state, it has an agenda of its own which, by and large, is the primary source of the political stalemate to which UN negotiations have so far led.

Algerian foreign policy’s professed hostility towards Morocco has been a fait accompli for some decades now, and until Algiers truly embraces the “observer” or “facilitator” position that it should adopt, the stalemate is yet to continue, exacerbated and fed by illusive and self-delusional foreign policies of self-interested states masquerading as observers and so-called “friends” of an inexistent oppression. So indeed: What does Algeria want? 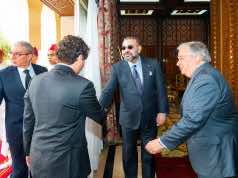