Rabat - World famous vlogger Nuseir Yassin or Nas Daily, shared five of his famous one-minute videos during his visit to Morocco, which celebrated the food, culture, and story of US’ first friend. 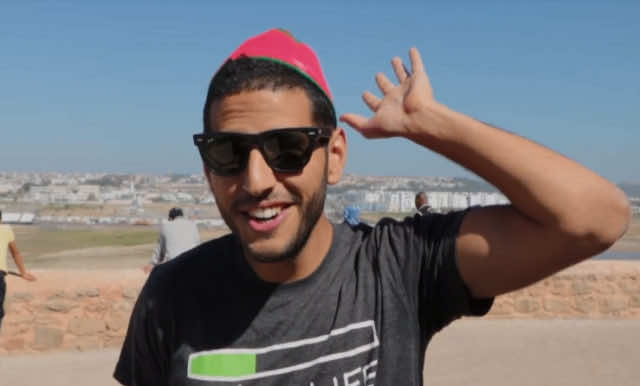 Rabat – World famous vlogger Nuseir Yassin or Nas Daily, shared five of his famous one-minute videos during his visit to Morocco, which celebrated the food, culture, and story of US’ first friend.

Sponsored by Royal Air Maroc and Joby Camera accessories, Daily arrived in Morocco with five of his fans from Mongolia, New Zealand, Poland, India, and Syria.

All travel expenses paid, Daily and his team embarked on a journey to discover Morocco.

First thing on the list: food. In a Facebook post, Daily said that he almost never makes videos about food, but Moroccan food is “too royal” to overlook.

From tajine to couscous,mint tea to snails, the vlogger dubbed the famous Moroccan dishes a “royal experience.”

The video, entitled “The Most Royal Food,” has attracted more than 793 thousand likes and over 2 thousand comments.

The comments on the video came from all around the world, sharing their experiences in Morocco.

“Moroccans are the most welcoming and simple people I have ever met. I went to the desert, and people that live in houses made out of mud will offer you bread, sweet oil, and mint tea. They received me as if they were expecting someone. Kids were happy, just because someone would play football with them. The most simple and happy people I have ever met,” Joaquín Llamazares said. His post received over 600 likes.

After their stomachs were filled, Daily and the other video producers explored Moroccan culture in Fez and the University of Al Quaraouiyine.

In the Facebook video, viewed over 1.8 million times, Nas explained that “The university was founded by a Muslim woman 1300 years ago. It offers a library and a top-notch education, and its students were Jewish, Christian, and Muslim.”

“This is surprising to you and to me because we don’t hear about this stuff anymore,” he said. The Palestinian-born vlogger added, “If we were once great, we can be great again.”

Roaming in the city of Fez, Nas met Ahmed Ghareb, an unlicensed tourist guide. Nas recounts his story as a 41-year-old guide, who’s never been to school and got arrested four times for unlicensed work, but also as someone who worked with tourists so much that he learned seven languages, including English and German.

Ghareb’s story attracted more than 650,000 views. Some of the commentators even asked Yassin where to find Ghareb, including Oran Aviv, who wrote in the comments section, “So how does one find Ahmed since you have convinced all of us to go visit Morocco!” Yassine responded saying, “Go to Fez, Morocco, and then go to the tannery (one of the oldest in the world) and look for a tour guide there! You’ll find Ahmed!”

Nas and his team departed from Fez to Tangier to discuss “the US’ first friend…not someone you’d expect.”

Nas later reported that “Morocco was the first country to recognize the US as an independent country and for the last 250 years the two countries have been trading together.”

He visited the first US diplomatic house outside of the US, which is situated in Tangier. “Right now in the news, we hear about the US trying to limit, disparage, and even ban Muslim countries, but how quickly we forget that the first country to recognize the US is a Muslim one,” he said, concluding his visit to Morocco.