The group’s adjusted net income share reached more than MAD 5.87 billion in 2017, up 4.4 percent compared to the previous year.

This increase is partly the result of resistance to VoIP mobile applications by some consumer segments in Morocco, and also due to the substantial growth in net income from international operations. International activities recorded a turnover of MAD 15.73 billion, up 2.7 percent over 2016.

“The Group’s large capacity to control costs and its profitable investment policy have enabled it to improve its margins, particularly in African subsidiaries,” said the Chairman of the Group’s Executive Board, Abdeslam Ahizoune, explaining that the group has invested more than MAD 8 billion in sub-Saharan Africa to establish new digital networks and to introduce mobile technology innovations for consumers.

Maroc Telecom mobile services, which numbered 18.5 million customers at the end of December, rose by 0.9 percent last year, generating a turnover of MAD 13.33 billion, down 5.5 percent, compared to 2016.

Maroc Telecom’s outlook for 2018 should see stable revenue and EBITDA. 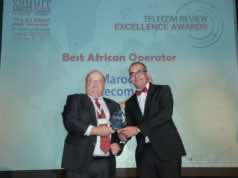