Rabat - 57 percent of offenders arrested for terrorism-related charges in Spain in the past year were of Moroccan nationality, finds a study by the International Terrorism Observatory. 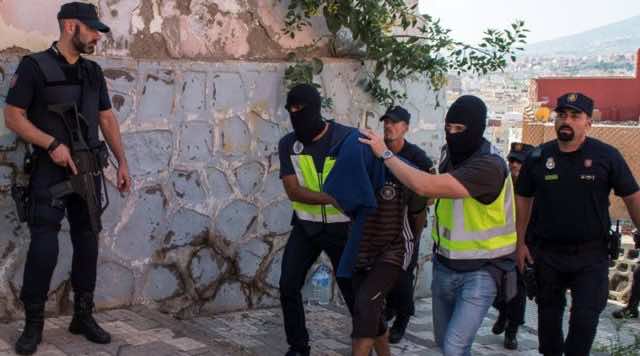 Rabat – 57 percent of offenders arrested for terrorism-related charges in Spain in the past year were of Moroccan nationality, finds a study by the International Terrorism Observatory.

The study indicated that 57 percent of people detained for terrorism in 2017 in Spain were Moroccan nationals, against 28 percent who were Spanish, reported Friday Al Massae daily.

Moroccan extremists are the main threat to the security of Spain, followed by Algerians at four percent and Egyptians at three percent, said the same source.

2017 was also marked by 51 police operations and 84 arrests, said the same source indicating that anti-terrorist operations have made remarkable progress last year, following the Barcelona bombings.

“The terrorist attacks in Catalonia in 2017 reminded us that the fight is not over and that much remains to be done,” said Consuelo Ordóñez, president of the Collective of Victims of Terrorism.

Facing terrorist threats, Spanish authorities have allegedly restricted freedom of speech and made excessive terrorism allegations during 2017, said Amnesty International in its annual report on the state of human rights in countries across the world.

“Authorities pressed criminal charges against people who had expressed opinions that did not constitute incitement to a terrorism-related offense and fell within the permissible forms of expression under international human rights law,” said Amnesty in its report published January 22.