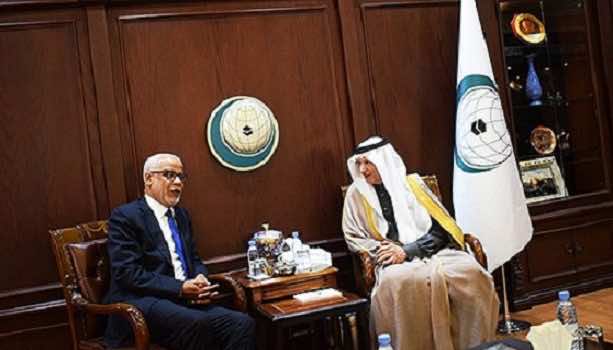 The two officials, who met on the sidelines of the fourth session of the Islamic Conference of Labour Ministers of OIC Member States, discussed ways to reduce unemployment in Islamic countries, especially among young people.

During the meeting, both officials stressed the need to adopt an effective approach to achieve the integration of member countries’ economies, with a view to enhancing investment flows, generating more jobs and promoting bilateral trade.

Yatim and Al-Outhaymine also underlined the importance of this fourth session of the Conference of Labour Ministers as an “important stage” for sharing viewpoints and developing visions that could help strengthen employment in Islamic countries by encouraging productive sectors.

The two officials emphasized the importance of elaborating upon new proposals aimed at strengthening their bilateral cooperation in this area, through the exchange of visits and the sharing of management expertise regarding the labour market in both countries, in accordance with the memorandum of understanding concluded between the two ministries in March 2016.

The 2016 Moroccan-Saudi memorandum, signed on the sidelines of the activities of the Third Global Forum on Employment Public Policies in Marrakech, aims at enhancing cooperation and exchange of experiences between the two countries by “providing each party with information on mechanisms for organizing the labor market and the best global practices that are currently applied.”