Rabat – The Contemporary African Art Fair took place in Marrakech on February 24 and 25, making its debut on the African continent.

The event was coordinated by 1-54, a London-based international fair dedicated to contemporary art from Africa’s 54 countries and diaspora. Founded in 2013, 1-54 has previously held the Contemporary African Art Fair in New York and London.

“It has been an important goal of 1-54 to host an edition on the African continent, and we could not think of a better place than Morocco to host this inaugural edition outside of London and New York,” said Touria El Glaoui, the 1-54 founding director and daughter of renowned Marrakechi painter Hassan El Glaoui.

This weekend, Marrakech highlighted 17 galleries from across Africa and around the world, including Casablanca’s Loft Art Gallery.

The fair also featured 60 artists from around the world, including 12 born in Morocco.

Artists, dealers, and viewers mingled in the corridors of Hotel La Mamounia near Marrakech’s Koutoubia Mosque.

In addition to the fine art on display, 1-54 also orchestrated a FORUM program, or a series of screenings, lectures, and panel discussions on the weekend’s theme: “Decolonize Always!” FORUM’s curator, Omar Berrada, elaborated on the theme in a public statement: “Our world may be post-colonial, yet it has not been decolonized. Colonial powers may have left, but their past presence casts a long shadow,” he said.

“Decolonization is not a bygone historical event; it is an everyday task. Always decolonize!”

Omar Berrada writes, translates, and co-directs Dar al-Ma’mûn, a library and artist residency in Marrakech. During the art fair, he moderated a series of panel discussions, focused on various aspects of the decolonization process.

Berrada assembled a cast of pan-African artists, historians, archaeologists, and critics for a panel discussion entitled “Decolonizing Knowledge.” Speaking to a packed audience in the conference rooms above La Mamounia’s gallery space, the selected speakers got to share their current projects and offer insight into the varied ways they “wage a battle of the imagination in order to invent new ways of acting and thinking.”

Visual artist, historian, and critic Nana Oforiatta-Ayim offered the example of a mobile museum project she formed in her native Ghana in 2015.

“We have museums in Ghana, but no one goes into them,” explained the London-born, Accra-based panelist. To challenge the colonial legacy in Ghana, Oforiatta-Ayim decided to rethink museum structures themselves. In imagining what kind of space would be inviting to all people, she ultimately decided on a flexible, mobile museum whose walls can be dismantled, packed “on the back of a truck,” and reestablished in the next town.

Oforiatta-Ayim said she hoped to challenge notions of value by creating a space where her country’s patrimony could accessibly be shared and celebrated. 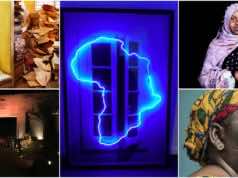 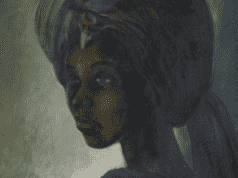 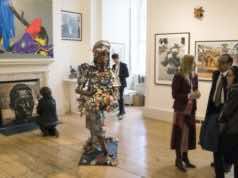 Moroccan Artists and Galleries Will Travel to London for 1:54 Contemporary African Art Fair