Rabat - Following the verdict announced by the European Court of Justice on the fisheries agreement, Morocco and the EU expressed on Tuesday their willingness to pursue, preserve, and strengthen their strategic partnership and their fisheries ties.

Rabat – Following the verdict announced by the European Court of Justice on the fisheries agreement, Morocco and the EU expressed on Tuesday their willingness to pursue, preserve, and strengthen their strategic partnership and their fisheries ties.

Federica Mogherini, the EU High Representative for Foreign Affairs and Security Policy and Vice President of the European Commission, and Nasser Bourita, Morocco’s Foreign Affairs Minister, said in a joint statement that “they took note of the verdict handed today by the EU Court of Justice” on the fisheries deal between the two parties.

The verdict of the ECJ reaffirmed the validity of the fisheries deal between the two parties as long as it does not involve the waters of Western Sahara.

In regard to the Western Sahara conflict, the EU and Morocco reaffirmed their support for the United Nations process and efforts of the UN Secretary-General, António Guterres, to reach a final political solution to the issue.

In the statement, both parties reiterated “their attachment to the strategic partnership between Morocco and the European Union and their determination to preserve and strengthen it.”

Both parties have agreed to further reinforce their political dialogue and preserve the stability of their trade relations.

Morocco and the European Union emphasized the importance of the close and sincere consultation spirit that guided the process of adapting the agricultural agreement that has created a valuable trust for deepening the partnership.

According to the statement, the partners are “determined to preserve their cooperation in the field of fisheries,” and “they have expressed their willingness to negotiate the necessary instruments relating to the fisheries partnership.”

“With this spirit and renewed confidence, the two parties confirmed the richness and vitality of relations between the European Union and Morocco and their full commitment to the continued development of the latter in all areas of mutual interest,” added the statement.

Both parties are keen to reinforce their cooperation in different areas in order to tackle other issues, including migration, stability, regional development, and scientific research. 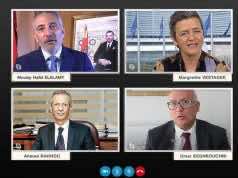