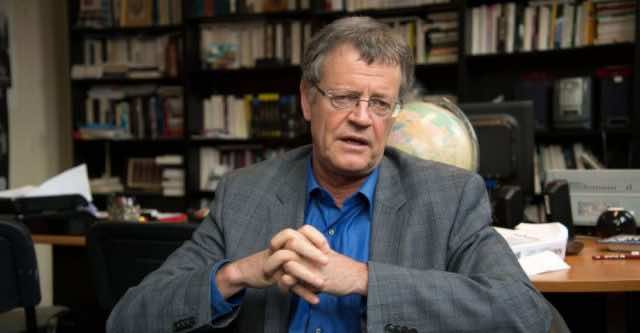 Rabat – The director of the Institute of International and Strategic Relations (IRIS), Pascal Boniface, asserts that the rotation system will favor the Moroccan bid in the 2026 World Cup.

In August of 2017, Morocco expressed its interest to the International Federation of Association Football (FIFA) to host the 2026 World Cup. Thus, Morocco will be bidding against the United States, Canada, and Mexico—all of whom have already expressed similar interest in hosting the event through a joint proposal.

“On paper, this is reminiscent of David against Goliath,” Boniface said, comparing the competitive situation  to the biblical story in which a young David fought and won a seemingly impossible battle against the giant “Goliath.” Morocco is outnumbered, with 34 million inhabitants against the combined 500 million of the other countries, and a GDP of 100 million dollars versus an astounding 20,000 billion dollars.

However, Boniface asserts that the “geographic gigantism” of the joint bid has its shortcomings.  If the joint bid were accepted, it would mean that the event would have to take place over an entire continent, which would potentially dilute the uniting interest of the World Cup, especially given the fact that 48 teams, rather than the current 32, will be competing in 2026. Thus, select a  country of more convenient size would be a better option.

According to Boniface, Morocco’s size would be an advantage, as it would make transportation around the country easy, —especially given that the existing infrastructure (such as hotels, stadiums, highways, and the LGV) will be ameliorated by 2026.

Most importantly, Boniface noted the “Trump Effect” is a major factor in helping secure  Morocco’s bid. It is crucial to bear in mind that the American President, Donald J. Trump, intends to build a wall that separates the U.S. from Mexico, thus making a joint bid between the two countries seem like an odd suggestion.

According to Boniface, although Trump may not be in office in 2026, countries will vote in 2018 for the host of FIFA 2026, and the American President’s “repulsive character”may discourage many countries from supporting the joint bid.

Furthermore, Boniface declared that America hosting FIFA would be directly harmful to FIFA and  its goal to change its management.  The  U.S. Department of Justice indicated top FIFA executives were involved in a case of widespread corruption, and that  FIFA must no longer be an  organism that controls football, but rather a  private company that will be listed on the stock market in NY. But this gives little  guaranty of an aim for transparency. The privatization of football can potentially scare off many voters.

Boniface highlighted the important geopolitical role that hosting the tournament would play if organized in Morocco, given the country’s identity as both an ethnically  “Arab” and “African” kingdom. Religion would factor in.  Although Islam is the country’s major religion, the kingdom maintains good relations with western countries and a high tolerance/openness to other religions. “[Morocco] can be a bridge between civilizations. At a moment where geostrategic clouds accumulate, Morocco, as a peaceful country, would send a positive message,” said Boniface.

The IRIS director advised Morocco to join hands with one of the countries of the Maghreb, namely Algeria or Tunisia, in organizing the bid and ultimately projecting a good-will alliance.

“Sometimes David triumphs over Goliath,” said Boniface. Morocco can aspire to be victorious, as it is the matter of a candidature of relative proximity against overpowering gigantism. It is also the competition of a peaceful candidate against the aggressive discourse that has been presented by the U.S. President.

In a recent interview with the weekly magazine Jeune Afrique, Boniface also openly welcomed the appointment of two African stars, the Ivorian Didier Drogba and the Cameroonian Samuel Eto’o, as ambassadors for the Moroccan bid.