Rabat - Speaking at a press conference in Rabat, Zambia’s Minister of Foreign Affairs Joseph Malanji reaffirmed on Thursday that his country has severed all ties with the Polisario Front-proclaimed Sahrawi Arab Democratic Republic (SADR). 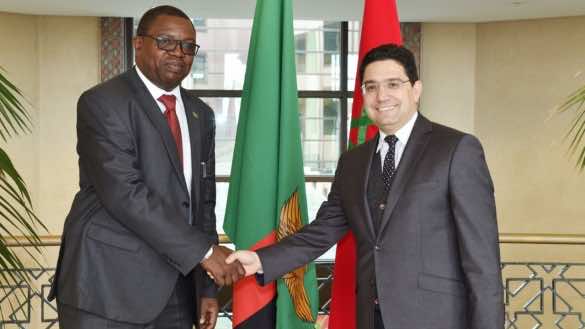 Rabat – Speaking at a press conference in Rabat, Zambia’s Minister of Foreign Affairs Joseph Malanji reaffirmed on Thursday that his country has severed all ties with the Polisario Front-proclaimed Sahrawi Arab Democratic Republic (SADR).

During a press conference co-chaired with the Moroccan Minister of Foreign Affairs, Nasser Bourita, the Zambian official said that “Lusaka no longer maintains bilateral relations with SADR.

Lauding the bilateral ties between Morocco and Zambia, Malanji said that Zambian diplomatic missions “will inform countries and the international and regional organizations of this decisive break” with the Polisario Front.

According to the Zambian official, the talks between both ministers of foreign affairs focused  “on the very good relations between Morocco and Zambia, which are expected to be reinforced in several areas, especially on  political and economic levels.”

After Morocco’s official return to the African Union on January 31, 2017, King Mohammed VI began an African tour on February 1, 2017. The King’s tour started from the Republic of South Sudan and then continued into Ghana, Zambia, Guinea, and Cote d’Ivoire.

During his visit to Zambia, King Mohammed VI co-chaired the signing ceremony of 19 partnership agreements with the Zambian leader Edgar Chagwa.

After the King’s visit, Zambia’s Former Minister Harry Kalaba announced his country’s decision to withdraw its recognition of the self-proclaimed SADR.

The announcement was made less than a month after Morocco’s return to the African Union and few days following King Mohammed VI’s first official visit to Zambia.