Rabat - Spanish authorities reported on Saturday that two sub-Saharan migrants died as they were trying to swim to the Spanish enclave of Ceuta.

Rabat – Spanish authorities reported on Saturday that two sub-Saharan migrants died as they were trying to swim to the Spanish enclave of Ceuta.

International media reported that two remains of sub-Saharan women were recovered by the Spanish Civil Guard. The migrants were on board a makeshift boat before they jumped into the sea trying to swim to the shore of Ceuta.

Two other sub-Saharan migrants, who were on board the same boat have managed to reach Ceuta after they jumped off the boat.

The group of migrants jumped into the water due to the bad weather that prevented their makeshift boat from approaching the Spanish enclave.

On February 20, Morocco’s Royal Navy managed to rescue a total of 71 passengers, including 13 women from two different inflatable rafts.

The majority of the men and women aboard were originally from sub-Saharan countries.

The number of migrants using the sea route from Morocco to Spain has more than tripled between 2016-1017.

Approximately 3,300 refugees crossed to Europe from Morocco in the first four months of 2017 compared to about a thousand in the same period in 2016.

These numbers are expected to continue rising. “The flows arriving from Maghreb countries to Spain are very likely to increase in 2018,” the director of Europe’s border agency, Fabrice Leggeri told Reuters, adding that the flows were boosted by the use of fast boats capable of transporting large numbers of migrants. 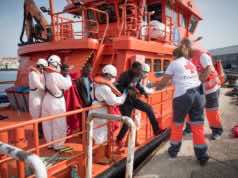