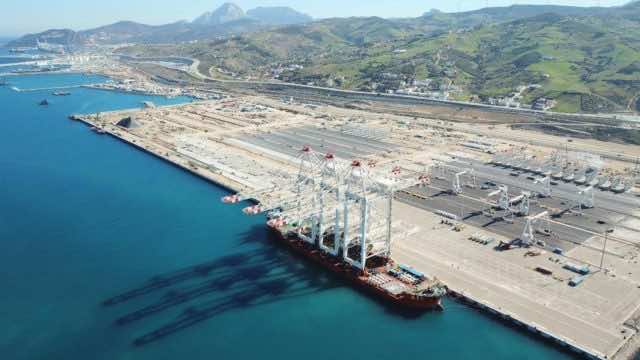 Rabat – Three of the world’s largest cranes have been installed off the coast of Tangier, where a new port terminal is set to open in 2019. The cranes represent state of the art technology that promise to help the new terminal cope with even bigger vessels, manage massive cargo coming through the Strait of Gibraltar, and point to a bright future for Tangier’s already prominent port.

As some of the largest ship-to-shore (STS) cranes in the world, each machine weighs 2500 metric tons and measuring 144 meters high. They are also world’s largest double trolley STS cranes with the ability to manage ships that carry 22,000 Twenty-Foot Equivalent Unit (TEU) or more.

In a February 23 press release, APM Terminals stated that the “remote-controlled cranes will enable fast, safe and efficient loading and unloading services to some of the largest container ships on the sea.”

“These cranes use digital technology to ensure the most efficiency during their movements. This will help us to deliver increased productivity throughout the process, from lifting a container box off the ship until it is delivered to its stack in the yard, and vice-versa.”

Each year, more than 60,000 vessels cross the narrow strait between North Africa and Southern Europe. Given that APM Terminals Medport Tangier is located at this nautical crossroads, the port already services over 200 cargo vessels daily, according to APM Terminals website. Now, with the addition of new technology, the new terminal is ideally situated to serve one of the most important shipping routes for Europe, Asia, the Americas, and pan-African markets. Olesen promised the new equipment enables a “very high productivity standard.”

“Maersk Line commissioned APM Terminals to build and operate APM Terminals MedPort Tangier so we are designing it around the customer by integrating operational excellence, the most modern cargo handling equipment and an ideal location for connecting global supply chains. This creates the necessary port capacity for the future. Equally important, this port creates another wave of future investment momentum in Morocco as a business and trade center,” said Keith Svendsen, Chief Operating Officer of APM Terminals.

In recent years, Tangier has already established itself as a major Mediterranean industrial zone whose ports influence regional industrial projects such as Renault Automotive factories based in the Tangier area.