Rabat - The French frigate Hermione, which carried the Marquis de Lafayette to the U.S. colonies, successfully arrived on March 7 in Tangier Med port, its first and only stopover in Africa.

Rabat – The French frigate Hermione, which carried the Marquis de Lafayette to the U.S. colonies, successfully arrived on March 7 in Tangier Med port, its first and only stopover in Africa.

Symbolizing freedom, solidarity, and peace, the Navy has been sailing since January 30 from its home port in Rochefort, France, to bring worldwide youths closer as it carries onboard 350 volunteer sailors from 34 French-speaking countries.

“I do not know if our experience can save the world, but it can serve as an example and make life more harmonious between people of different cultures, different countries, to be more open and more patient,” says Dani, one of the sailors from Canada.

Launched in April 1779, the original Hermione is famed for having taken General Lafayette from Rochefort, France to Boston, USA, to deliver the secret news that he had secured 5,500 French troops and 5 frigates to support George Washington in fighting the American Revolutionary War.

Miles Young, president of the Friends of Hermione-Lafayette in America, said that the resurrection of Hermione makes history alive again.

A crowd of several hundred people cheered its arrival at the port, including Morocco’s Minister of Justice, Mohamed Aujjar, and the French ambassador to Morocco, Jean-François Girault, who praised the commitment of these young gabiers participating in the movement “Freedom Together,” describing this first stopover of the Hermione in Tangier to be of  “great importance” as it symbolizes the “exceptional friendship between France and Morocco.” 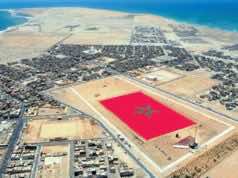